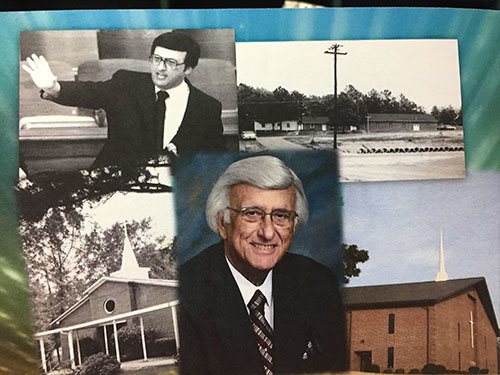 A collage reflects the stages of Pinehurst Baptist, Columbus as well as its pastor, Tony Dickerson, over the years. PINEHURST BC/Special

COLUMBUS — Tony Dickerson, one of Georgia Baptists’ premier preachers and beloved pastors, was honored during a weeklong celebration beginning July 23rd and continuing through Sunday, July 30th. The celebration highlighted Dr. Dickerson’s 60th year in ministry, the beginning of his 45th year as pastor of Pinehurst Baptist Church, and the 62nd anniversary of the church.

Dr. Dickerson went to the Columbus church on August 1, 1973. During his tenure as pastor the church has grown from a resident membership of approximately 200 to a total of over 3,800 members.

In expressing his gratitude to the congregation the Pinehurst pastor made a comment typical of his wit and wisdom. He said, “It is glorious to remember the triumphs of the past and rejoice in the blessings of a Sovereign God upon us individually and upon our congregation, however, we do not want to be ‘peacock Christians’ with all our glory behind us?

“Sweet friends,” Dickerson emphasized, “we have not reached the end, but only the end of a great beginning! We are now ready to cross over Jordan into the Promised Land! ... [J]oin me as we march on to victory! As a pastor and people, we are headed for 50 years of ministry together, and beyond!”

Dickerson’s indomitable spirit, commitment to his flock, love for the Lord, and sense of divine call have given him the determination to press on despite the fact he is battling bone cancer. His valiant fight could very well be motivated by two of his favorite Bible verses: “For God hath not given us the spirit of fear; but of power, and of love, and of a sound mind” (II Timothy 1:7).

Another passage dear to Pastor Dickerson’s heart is Acts 20: 24, where the Apostle Paul writes, “But none of these things move me, neither count I my life dear unto myself, so that I might finish my course with joy and the ministry, which I have received of the Lord Jesus, to testify the Gospel of the grace of God.”

'Preached with passion and energy' 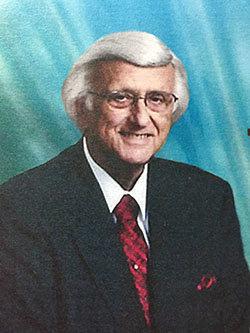 Pastor Tony Dickerson, currently in a battle with bone cancer, has led Pinehurst Baptist Church for 45 years in his 60 years of ministry. PINEHURST BC/Special

The cancer has affected his mobility to some degree, but his leadership is as effective as ever and his preaching continues to keep his listeners riveted to every word he has to say.

Tommy Law, minister of education and seniors, has described his preaching as “biblically-based, expository sermons preached with passion and energy.”

Law added, “Our pastor is very unselfish and he loves Jesus more than anyone I know. His life is dedicated to reaching people for Christ and helping them in whatever way he can.” Law indicated that Dr. Dickerson’s ministry is both dynamic and compassionate.

We are told a congregation often takes on the personality of its pastor after a period of time. That must be true of Pinehurst, because the people of the church are among the most warmhearted and welcoming on this earth.

Carmel Biggers, Sr., chairman of the deacons, testified, “I would like to congratulate and thank for 44 years of faithful service. It was through leadership that my entire immediate family was saved.”

Service outside of church

In spite of Dickerson’s physical challenges, he makes his way to the church each morning and often stays until hours after dark. He provides leadership for the church and the school and those who hear him preach know he spends many hours crafting sermons that are well-researched and divinely-appointed and anointed.

Jerry Speer, pastor of Northside Baptist Church in Columbus and dear friend of Dickerson, preached the message on Wednesday evening, July 26, as a part of the weeklong celebration. He stated, “I don’t know of anyone who carries the banner of reaching people, regardless of who they are, with more passion than Tony Dickerson.”

The distinguished Georgia Baptist statesman has not only served his church with integrity and wisdom, but has been a driving force in establishing the Georgia Baptist Convention as a bastion of missions, evangelism, and biblical preaching. He served Georgia Baptists as Convention president (2003-2005) and has held a multiplicity of positions with the Columbus Baptist Association, including several terms as moderator. Speer stated, “I have been pastor of Northside Baptist Church for 36 years and I think Brother Tony has held every position in the association with the exception of WMU (Woman’s Missionary Union) director.”

Chris Humphries, Dickerson’s son-in-in law and pastor of Calvary Baptist Church in Austell, preached for the anniversary service on July 30 and remained for the evening service when the pastor preached a powerful message on Acts 20:17-38. His title was: “Looking Back, Looking Up, Looking Ahead.” By all accounts the church worship center was filled to capacity on Sunday evening and the presence of the Lord was evident throughout the day. 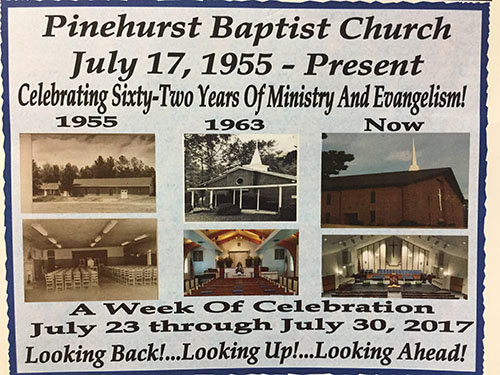 Humphries attested to the fact that wherever his father-in-law goes he is sharing his faith, passing out information about the church, and urging people to worship with him on the Lord’s Day. Humphries said, “It is amazing that he never, ever misses an opportunity to tell people about the Lord and the church.”

One of the significant accomplishments of Dickerson’s ministry at Pinehurst has been the founding and success of the church’s Christian school. Principal Beverly Law expressed thanksgiving to the pastor for the establishment of the school and the quality education it provides in a Christian environment.

The principal stated, “Thousands have been influenced by the ministry of Pinehurst Christian School, where students achieve academic excellence and come to a saving knowledge of Jesus Christ.”

Tony Dickerson was called to preach when he was 12 years old and has devoted his life to telling the story of Jesus and His redemptive love. He has seen thousands of people come to faith in Christ as a result of his ministry. The Christian Index prays God will grant him many more years of fruitful service to the King of kings and Lord of lords.