What if every church gave like Chapel by the Sea – WOW! 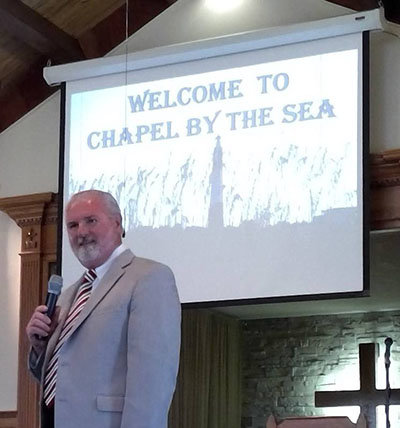 Chapel By The Sea Baptist Church felt it had always given a respectable amount to missions, said Pastor David Laughner, before the church realized it hadn't. CBTS/Special

TYBEE ISLAND — The easternmost point in the state of Georgia is Tybee Island, a barrier island in Chatham County near Savannah. The phrase “From Rabun Gap to Tybee Light” – meant to illustrate the geographic diversity of Georgia – contrasts a mountain pass near the state’s northernmost point with the coastal island’s famous lighthouse.

Tybee Island has four churches, one of them being Chapel by the Sea Baptist Church, where David Laughner is pastor. The church was started in 1947 as a mission of Immanuel Baptist Church in Savannah and constituted in 1948. Through the years Chapel by the Sea has had a total of 16 pastors, averaging just over two years for each one. But, Laughner has been there for 24 years.

However, one would find it virtually impossible to find a church more generous that Chapel by the Sea, particularly when it comes to missions giving.

Laughner says the church averages about 60 in Sunday School attendance and 125-140 in worship. This year the church has already given more than $43,000 to the Lottie Moon Christmas Offering for international missions.

“Tybee Island has a population of less than 3,000. It's not a community, not a resort, and not even a retirement settlement. It is a fluid area where people are moving in and out all the time," the pastor said. 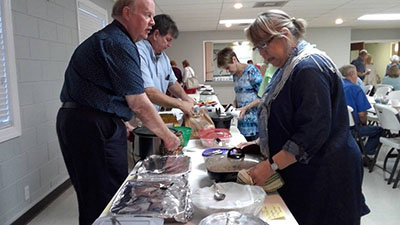 Members of Chapel By The Sea Baptist Church prepare for the meal on Missions Night. CBTS/Special

"The turnover is incredible. It appears the people coming to Tybee Island are either running from something or searching for something. Being at the end of U.S. Highway 80, it's not a place you go through. You have a purpose to come here.

“For years we were known as the 'Redneck Riviera' of Georgia, but that changed with the 1996 Olympics. The Olympic Committee came to Tybee Island in 1995 to see if this would be a good place to hold beach volleyball events. Although they decided to have beach volleyball in Atlanta, it brought attention to our community and people started coming. People who had built houses with limited costs started selling their property for unbelievable profits, and the island changed.

“The average age of the residents on this island is probably about 55," said Laughner. "This is what I call a pre-retirement group of people. The people in our church aren’t particularly wealthy, but they are generous and have caught the vision of giving to international missions and missions in general.” 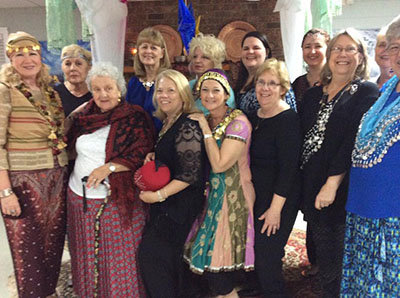 Missions Night at Chapel By The Sea Baptist Church in Savannah, held the first Sunday evening in November, kicks off the congregation's fall missions emphasis. Chapel's WMU, pictured, also presents the world region where the missions giving will focus. CBTS/Special

The church reported a budget for 2017 of $222,000 with 11 percent going to the Cooperative Program and 25 percent allocated for all mission causes. However, the Lottie Moon and Annie Armstrong mission offerings are in addition to the designated budget mission allocations.

Laughner explained, “Our story begins in 2006 when the head of our WMU came to me and expressed her concern about the level of our missions giving. We had always given a respectable amount to missions, but felt we could do more. Our regular Lottie Moon offering was always around $1,000 or $1,500 each year.

“I asked her to give me a little time to pray and ponder this matter and that I would get back to her with some new ideas for the Lottie Moon Christmas Offering. I challenged her to see if she really wanted a major change. In response she affirmed she and the ladies were ready for something new and challenging.” 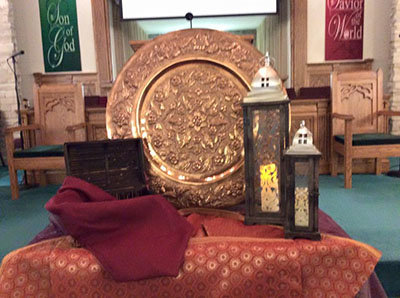 This container held items for church members during the mission march. CBTS/Special

It was not long until pastor Laughner offered to the WMU ladies the following presentation:

(1) “Let us devote the entire month of October to missions with a challenge presented to the church each Sunday by one of our ladies – called a missions moment;

(2) No more setting a simple goal, but rather challenging the people to truly pray and seek God’s face as to what they should give;

(3) We will no longer “take” an offering, but rather “give” an offering and begin our “Mission’s March Offering” on the evening of the first Sunday in November urging our people to come forward and place their gift before the Lord themselves; and

(4) Set the first Sunday evening in November as our official Mission’s Night by the receiving of the offering followed by a special presentation by our WMU ladies who will focus on the region of emphasis for that year.”

Laughner reported, “The first year we made these changes our people gave a total of $5,000. We were greatly surprised by this and thought it to be a one-time experience. The following year we gave over $5,000 for missions. Our people began to get excited and they caught the vision of what they could do for missions.

“The next year we gave over $10,000. The fire was now burning bright and the people had accepted the challenge. In 2010 Chapel gave $17,011.19 and was recognized for attaining the Manchuria Challenge."

Challenge met, but not finished

The Manchuria Challenge Award recognizes churches that give over $100 per capita to the offering. It represents only 2 percent of the 50,000 churches and church-type missions that comprise the Southern Baptist Convention. The award is named for the ship upon which Lottie Moon died on December 24, 1912. Weighing only 50 pounds, Moon was carried aboard the ship to return to America to be nursed back to health. She had given everything – including her own food – to her beloved Chinese people, but died onboard the Manchuria. 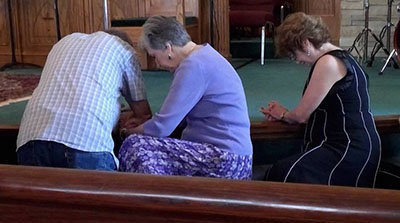 Members of the church gather to pray for missions. CBTS/Special

Last year Chapel by the Sea gave $31,230.40 to the LMCO. Laughner remarked, “This giving total surprisingly stunned our own people and caused many to believe we had about topped out our giving limits. However, our people came through again this year with the record amount.”

One man in the church who has farmland in Screven County grows vegetables during the summer. But, he comes back to Tybee Island on weekends and makes his produce available to those who are interested. All donations go to the Lottie Moon Christmas Offering.

Every quarter the church has a fellowship dinner focusing upon a specific food item. The women prepare their favorite recipes and submit them to be placed into a cookbook that is offered in November. All donations go to the Lottie Moon Christmas Offering. This year the church has had to produce over 70 cookbooks. The average donation is $10.00 for each recipe book.

Laughner stated, “I would like for my people to be recognized and not me. It is the people of Chapel that have caught the vision and challenged themselves to do better for the glory of God in reaching this world’s lost. I am just a pastor blessed to serve with a people of great faith.”