HELEN — Last November Michael Wilkes had hit That Point. Times were difficult. His mother-in-law had health issues and he and his wife, Courtney, had just experienced their fourth miscarriage.

"Those were difficult times," remembers Wilkes, pastor of Center Baptist Church in Helen. "I felt I needed some spiritual renewal. God got a hold of my heart to make some changes." 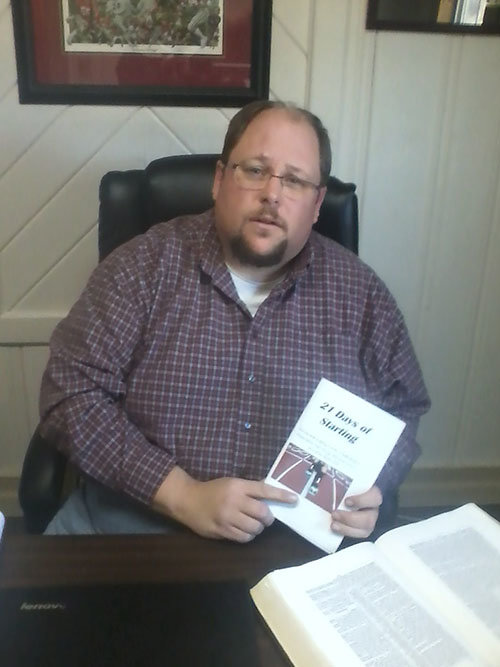 Michael Wilkes' challenge to his church in starting better habits began personally and grew into a devotion he wrote for those at Center Baptist north of Helen.

Mulling over those personal changes began to take shape in his mind before reaching a keyboard. Like others, Wilkes had at times in his life vowed to stop doing things that hindered his walk with Christ or affected him negatively in some other way. In his research he came across a simple principle of starting better habits as opposed to focusing on stopping bad ones.

"That stirred in my heart," he says.

Using Philippians 3:14-15 ("I press on toward the goal ...") as a background, Wilkes began writing a devotional for his church. 21 Days of Starting was presented to members of Center Baptist as a way to begin good habits through 2016, hoping to break through that invisible net that seems to catch most New Year's resolutions by the end of January.

Writing on his blog, Wilkes pointed out the significance of the passage in Philippians, "[It's] where Paul does two things that we must do to begin our journey of starting – reflection and action.

"Reflection: I must first be honest at where I have been, where I am and where I need to go. Then, action: this one thing I do – what are the action steps that I need to take to get me where I want to go. In it all, Paul points us to Jesus. Whatever you start doing, Jesus must be our greatest passion and focus."

It's important to note Wilkes is promoting 21 days of starting, and not establishing, good habits. Different studies have shown that in the past this has been flipped and many thought they would instinctively be eating better and managing their money in three weeks. Clemson and Alabama had to go longer than that between their final game to the national championship Monday night.

It actually can take up to two months or longer, depending on the individual, for a habit to form. That's why Wilkes is urging church members to take it slow.

"The first 21 days will probably be about identifying those things to begin," he says, also acknowledging he had a head start. "It's important to take small steps and identify what will bring positive changes and get us closer to the Lord. I've been thinking about my own ideas from two months; our people have only had a couple of weeks."

Although with a Helen address, Center Baptist Church is actually in the community of Robertstown, renamed when it moved – you guessed it – to the center of town. The area is known for Helen's German Bavarian theme and Unicoi State Park, but Wilkes is looking forward to seeing where his congregation's renewed focus takes them and becoming an attraction for others to the Gospel.

"People have been telling me how God is stirring in their heart to move in a direction and renew some things," he says. "If the heart gets renewed, then to God be the glory."