The unanimous election occurred during a special called meeting of the auxiliary’s executive board in late July.

Lee, a former resident of Columbus, used her experiences as a missionary, pastor's wife, nurse, missions volunteer and Acteens leader in her 16 years at the helm of the missions organization. She was installed as WMU's seventh executive director during its June 2000 annual meeting in Orlando, Fla.

Wisdom-Martin will begin her new role on Oct. 15. Lee had announced her retirement plans in February.

Prior to leading WMU of Texas since 2010, Wisdom-Martin served as women’s missions and ministries director for the Illinois Baptist State Association, 2001-2010; and as Cooperative Program Missionary with the Arkansas Baptist State Convention, 1991-2001.

"Experience as a leader ... with tremendous creativity"

“Having served in three different Baptist state conventions, Sandy brings great experience as a leader to this role along with tremendous creativity,” said Joy Bolton, executive director of Kentucky and chair of the search committee. “The affirmations of her leadership received from people in each state where she has served speak volumes. She has earned love and respect through partnerships, missions trips, speaking engagements, and other missions involvement.”

Bolton describes Wisdom-Martin as “a thoughtful leader who listens well and brings clarity to complex situations when she speaks.”

Lee agrees. “I’ve had the privilege of observing and working alongside Sandy for many years,” she said. “Sandy listens well, considers every possible action before she speaks, and then delivers on what she promises. Her quiet presence puts people at ease while building confidence in the actions to be taken. She will lead WMU well from a place of complete surrender to the Lord.”

In regard to transition of leadership, Lee added, “I am excited about handing over this important place of service to Sandy and pledge all of my support and prayers as she comes to lead WMU into the future. Her love for missions, missionaries, and WMU provides a strong backdrop for developing the vision we need for the future of WMU.”

In addition to more than 25 years of experience in state WMU and church and community ministry, including children’s missions education camps, Wisdom-Martin 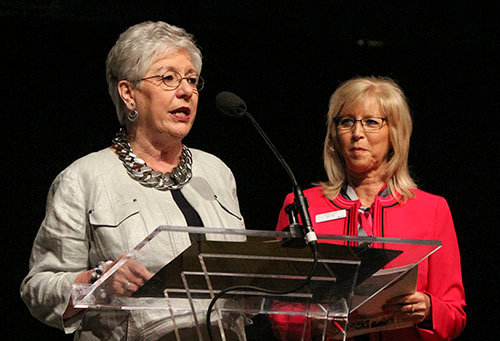 While not the WMU’s longest serving top administrator, Lee served longer than the two previous individuals – Dellanna O’Brien who served 10 years from 1989–1999 and Carolyn Weatherford Crumpler who served 15 years from 1974-1989.

Annie Armstrong – WMU’s first leader – served in the same role, known as corresponding secretary, from 1888 until 1906 for a total of 18 years.

Current Georgia WMU President Jackie Hardy of Social Circle remembers the leadership skills Lee exhibited in Georgia prior to her stepping onto the national WMU stage. At the time she and her husband, Larry, were serving in Columbus.

Lee led "WITH GRACE AND INTEGRITY”

“Georgia WMU has had many presidents through the years who have led us well. Wanda was no exception, leading with grace and integrity. She carried that with her to Birmingham when she became national WMU executive director/treasurer after having served as president for Georgia WMU.

“She set the bar high when it comes to missions leadership. Wanda leads by example in her encouragement of others and her commitment to excellence. She will be missed but her legacy will continue to influence many as we continue to lead believers to be radically involved in the mission of God.”

Lee was known as being an active leader in WMU and Baptist life on all levels – national, state, associational, and in the local church.

She left Georgia to be executive director of National WMU in January 2000. She is the only woman in the history of WMU who also served as national president, an office she held 1996–2000. Lee also served as president of Georgia WMU from 1993 until 1996. A graduate of the Ida V. Moffett School of Nursing (now part of Samford University in Birmingham, Ala.), she ministered to others through healthcare.

While in Georgia she invested the majority of her nursing career at St. Francis Hospital in Columbus from 1982 through 2000, and in St. Vincent, Windward Islands, where she and her husband, Larry, served through the International Mission Board from 1979–1981.

She served on the Georgia Baptist Executive Committee, 1993–1996; AIM96 hospitality chairperson for the Olympics in Columbus in 1996; and divisional vice president for BWMU of Georgia, 1987–1991.

From 1990–2000, he served as a NAMB-endorsed chaplain as director of pastoral care for Columbus Regional Healthcare. During those 10 years the Lees were active members at First Baptist Church of Columbus.

Lee demonstrated that servanthood through a variety of channels. While at First Baptist in Columbus she served as associational and church WMU director, Women on Mission group facilitator, and a certified literacy tutor. For 25 years, she also led and mentored girls through Acteens, the missions organization for teens in grades 7–12, at both churches where the Lees were members in Georgia as well as Gilgal Baptist Church in Tuscaloosa, AL, where Larry Lee was pastor from 1972 until 1979.

The Lees will continue to live in Alabama.