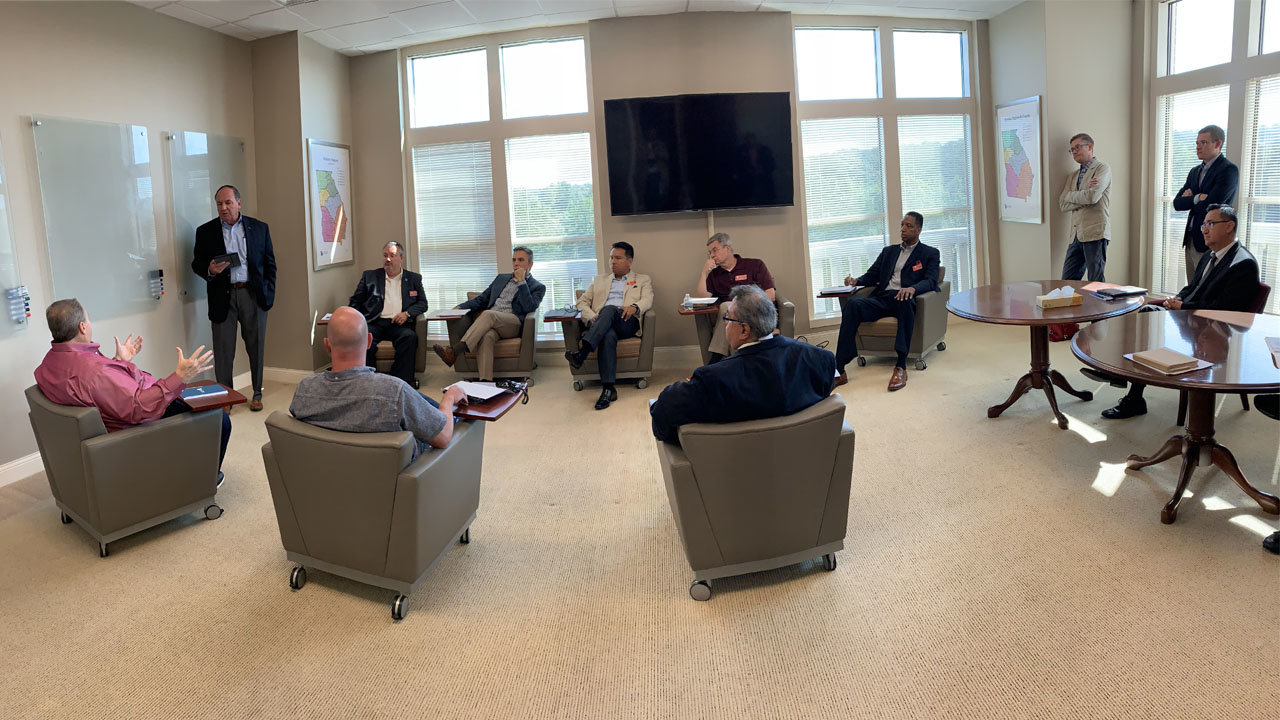 DULUTH — In their meeting Sept. 10 at the Missions and Ministry Center, the Georgia Baptist Executive Committee took part in customary practices such as approving a new budget for the upcoming year. It was a notable change in practice, however, that signaled a new modus operandi for the group.

“We want the EC to be more of a working committee, allowing the members to have an opportunity to hear the ideas and direction of each Mission Board team. This gives Executive Committee members the opportunity to share their ideas to ensure we are doing what's best to serve pastors, their families, and their churches,” Georgia Baptist Executive Director W. Thomas Hammond, Jr., explained to The Christian Index. 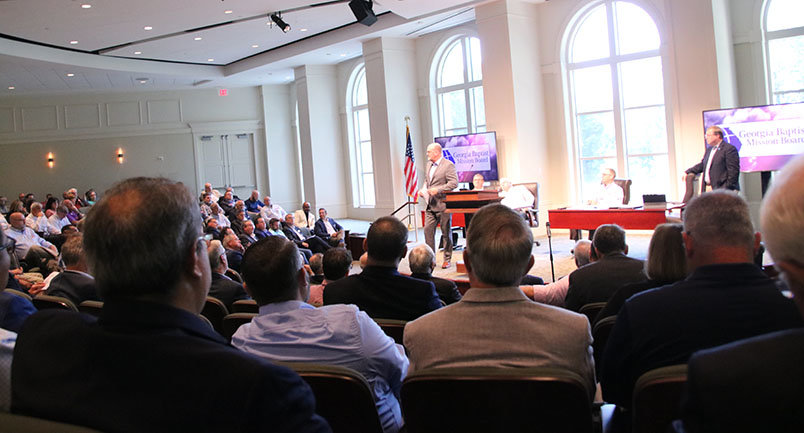 At the quarterly gathering, Executive Committee members also approved a 2020 budget of $40,250,000, a decrease of $1,050,000 from 2019. The decrease, noted budget committee chairman Chad Rising, places the budget in line with the 2019 projection for gifts received to the Georgia Baptist Mission Board. Messengers to the GBC annual meeting at New Hope Baptist Church in Fayetteville will give final approval to the budget.

Rising, pastor of Blacks Creek Baptist Church in Commerce, also reported that the budget reflects a 60/40 split of receipts, with the majority staying in Georgia. That figure represents $16,100,000 being forwarded to the Southern Baptist Convention Executive Committee in Nashville.

The group breakout discussions were the most noticeable break from typical EC meetings. The only criticism pastors offered was a desire for more time to talk over their assigned subject. 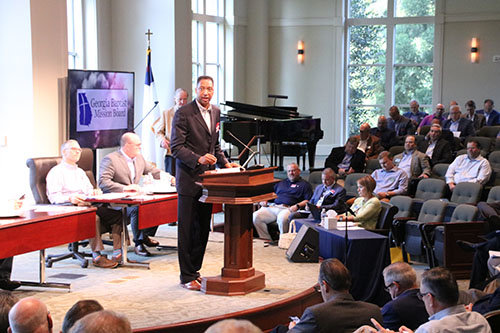 “It was a fresh approach,” said Lee Lacey, pastor of First Baptist Sandersville, who discussed collegiate ministry among fellow Committee members in a third floor meeting room. “Thomas wants to hear from pastors, and we appreciate that. It’s good for us to offer input and participate more actively in the discussion.”

“I like the idea [of discussion groups]. We’re in a college town and our church works extremely close with the university. We’re pretty passionate about ,” said Vargas, who is in his first year of serving on the Executive Committee.

“Personally, I like the format and see how it can be helpful going forward.”

Back in the larger group, Otis White presented the discussion by his group, focused on strategic church planting.

“One key takeaway pointed to part of the name of our committee – strategic,” said White, pastor of LIFE Church in Morrow. “We need to be more strategic in networking our resources, of sponsoring and sending churches, as well as educating churches and church planters.” 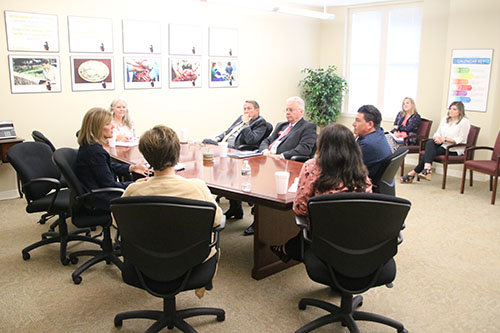 Group topics connected with strategic components and departments of the current Georgia Baptist restructuring. Among those subjects were:

“Everything we do is important in church, but if we’re not doing evangelism then we’re not reaching people,” he said. “Be intentional about your evangelism. Don’t just talk about it. Actually plan it and do it. Have events that are designed to reach people. Be passionate about it.

“And the last thing, as a pastor, model. Be the one out there leading the charge. Your people will follow suit.”

A budget ‘built from scratch’ 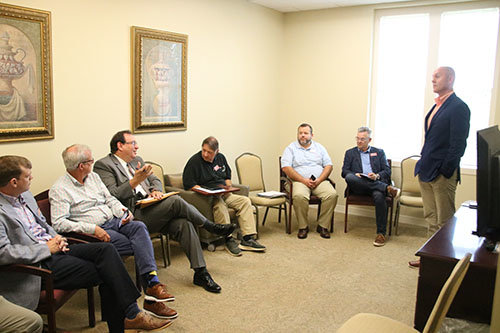 The second half of Hammond’s report – following breakout groups and representatives presenting their discussions – focused on the 2020 budget.

Speaking to some 100 Executive Committee members, plus guests and various Mission Board staff, Hammond didn’t dodge the tough choices required in funding ministries best suited for reaching Georgia, North America, and the world. 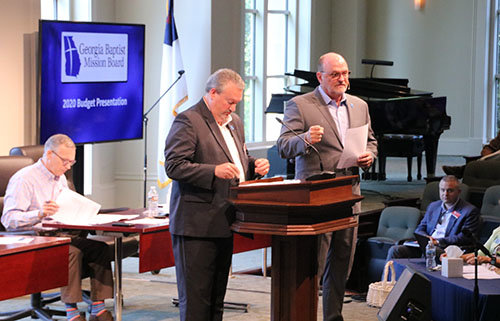 “We’ve done a lot of cutting and a lot of moving to make this budget very effective and strategic,” said Hammond.

Those steps, he added, have also included “welding together” some departments to better maximize funds and therefore, effectiveness. For example, Evangelism and Church Revitalization have combined to become part of the Church Strengthening team. Those two items in the previous budget received $655,000, Hammond related. Their new line item in the 2020 budget would be $978,718.

“Anytime you get a church healthier in evangelism,” he stated, “it’s going to lead to revitalization.”

Hammond went on to point out that $266,691 had been reallocated from the Executive Leadership Team budget toward other areas, such as a 63% budget increase for Next Gen from $476,423 to $756,971.  He also noted the establishment of Georgia Baptist Women in the Mission Board’s new structure. “We want them to have a higher level of prominence in our ministry strategy,” he commented.

From the beginning of the restructurings’ implementation Hammond has stressed the three core principles of the Georgia Baptist Mission Board:

The two “rails” on which those values run, he stated again, are Church Strengthening and Pastor Wellness. 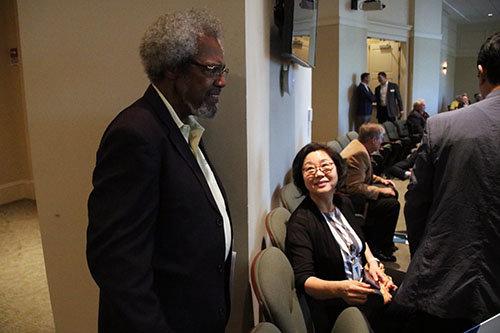 “We’ve taken components of Church Minister Relations and built upon them for an emphasis on Pastor Wellness,” he said. He then announced the formation of a separate ministry team dedicated to bivocational pastors. Almost half of Georgia Baptist pastors minister bivocationally, with that setting making it difficult to provide events and training that fit their schedule. “So, we felt it better to dedicate a team to them,” he said. “ Marcus Merritt will lead this group.”

Hammond pointed to Chief Financial Officer Toby Howell in leading a degree of restructuring to Georgia Baptists’ budget not seen in more than 60 years. The effort, he emphasized, is for the benefit of those in attendance and their peers.

“I’m thankful to Toby and his team because we’re building from scratch a brand-new budget in a way we’ve never done before. This took a lot of work … and it wasn’t like there was [an example] already in place. It was a rebuild of a budget to better serve you.”