Challenge students and watch them excel

MONROE — The students of First Baptist Church in Monroe have been hard at work to raise money for Disaster Relief.

On Sunday, Oct. 29 Bobby Boswell, assistant executive director of the Georgia Baptist Convention, went to the church and received a check for $5,463.84 to help victims devastated by the recent hurricanes. 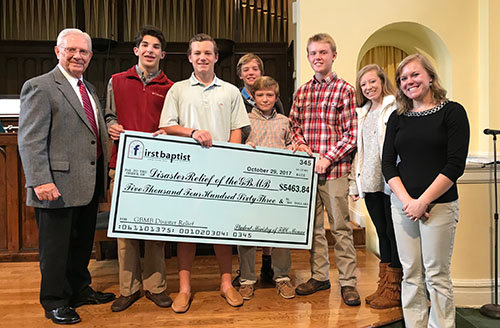 The students were given the initial seed money of $10 on Sept. 10 and challenged to return to the church the proceeds of their investments by Oct. 15, so they had just a few days more than a month to turn their dollars into more dollars.

Gloria Briscoe, who works in the student ministry at the church, stated, “I cannot take credit for this idea. After the earthquakes in Haiti in 2010, my student minister, Gordon Davidson, gave each of the youth $10 to multiply.

“Seven years later and after the devastation left by Hurricane Harvey was painfully apparent, Gordon walked into my office, sat down, and said, ‘Remember when we did Hope4Haiti?’

“That was all he had to say. I spent the rest of the week planning what we called ‘Hope in the Storm.’ Once Irma and Maria hit shortly after Harvey, it confirmed how badly help was needed to step up and do something about it. The students were moved to compassion, which was ultimately the driving force for the entire effort.”

After the students were given their $10, Gloria added, “I was blown away by the way the students used their talents to raise money for disaster relief. One student, Noah Prather, sold fresh eggs from his farm.

“Two students built a pallet cooler and sold raffle tickets for it, which raised a whopping $3,000. Many other students sold baked goods, babysat, did odd jobs, and helped with catering jobs to raise money.

Gloria concluded, “The church was incredibly supportive of all the students’ fundraising efforts. They bought cakes and eggs and raffle tickets and came out to the flag football game and cheered on our students throughout the entire effort.

“They were truly surprised by the amount of money a bunch of kids were able to raise, which inspired them to do more for the cause, as well. We could not have made this possible without the unwavering support of our entire church family. There were 52 students involved in helping to raise the money.”

Students are talented, creative, energetic, and ready to serve. About all most churches need to do is give them a worthy cause, support their efforts, and watch them move into action. Kudos to the students at First Baptist Monroe.