For Judy George, retirement means shifting from one ministry to others

For Judy George, nearly 30 years of service with Georgia Baptists have been like a walk in the park. Or, for the past 20 years, more like a walk across a college campus.

George will retire on July 31 with 28 years of ministry under her belt and says those decades have been among the best of her life. And while it may come to a professional end on Monday, she intends to remain fully connected to Georgia Baptists through missions in general and her ongoing service at Mountain Park First Baptist Church in Stone Mountain. 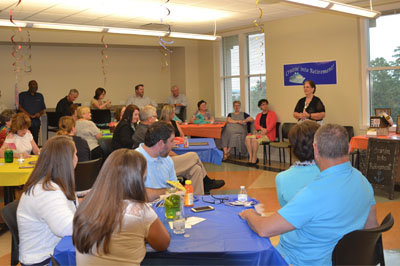 George expreses appreciation for her nearly 30 years of ministry with fellow state missionaries at her July 24 retirement reception. EDDY OLIVER/Special

The genial George first set foot in the Baptist Building, as it was known at its Flowers Road location in 1986. She was a member of First Baptist Church of Tucker, where her husband Greg served as youth minister.

That’s when Don Folsom, also a member of the church, and Dewitt Cox asked her to fill in at the Georgia Baptist Foundation while a secretary was on maternity leave. When that ended she found employment with a secular organization but was called back into service three years later when Frances Weldon, who worked in the Foundation office, gave her a recommendation for a job opening with Bobby Boswell in the Sunday School Department.

“Frances said I was perfect for the job because I was Miss Church Woman; at First Tucker I was the WMU director, taught Acteens and Sunday School … if it needed to be done I was doing it,” she says with a laugh.

A 45-mile commute via bus, MARTA train, and another bus

The only problem with that situation is when her husband accepted a fulltime pastorate in Palmetto and the family moved into the parsonage. That’s when George began a 45-mile one-way commute, taking a 5:30 a.m. Fulton County bus with two connections to a MARTA train and then to a bus from the Chamblee Station to Flowers Road. The last leg required her to walk from a bus stop near the Baptist Building. 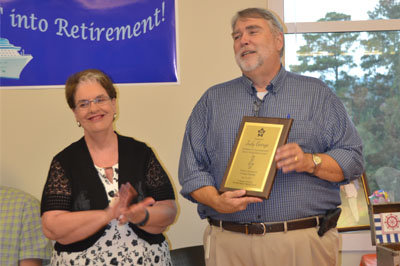 Collegiate Ministries Department Director Joe Graham presents George with a plaque and best wishes for her retirement years. Graham has served alongside George for her 20-year career in the department. EDDY OLIVER/Special

After 18 months she was luckily offered a part-time recruiters position with both the Children’s Homes and Developmental Disabilities Ministries just down the street from the parsonage. She carpooled with her supervisor, James Harper, until her office relocated to the Palmetto campus.

What began as an answer to prayer and a long commute in Atlanta traffic took a sudden turn when her husband accepted a secular job back in Atlanta … and the family moved to Lilburn where Greg was working and also served as a part-time minister of youth at Pine Lake Baptist Church in Stone Mountain. Unhappy with the idea of a reverse commute from Atlanta to Palmetto, she accepted a position back in the Baptist Building with Collegiate Ministries.

That final leg in her career began on July 11, 1997 and culminated two decades later this week. She has seen a lot of change, beginning at the Flowers Road campus and continuing through the move to the Georgia Baptist Mission Board’s Ministry and Ministry Center in Duluth.

“I have loved every ministry I have been involved in but Collegiate Ministries is so unique, perhaps because it is where I have served for the past 20 years … longer than any other,” she says in retrospect.

George says she loves working with college students and being around young people as they enter one of the most challenging periods of their lives. And she is grateful for the campus ministers who are there to shepherd them through those waters which can be turbulent at times.

It is especially rewarding to see those students who have their first experience in missions through their Baptist Campus Ministries involvement. Many of those have felt the call to fulltime service and have served through the North American and International mission boards throughout the continent and around the world. 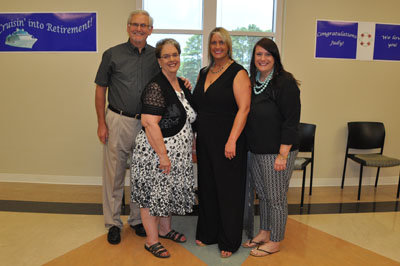 “We have great campus ministers all around the state who are passionate about their calling to shape the next generation. So often students entering college do not know what they want to do with their lives or, in some instances, who they are. They are still shaping their world view and their view of themselves.

“Campus ministers are Georgia Baptists’ ‘boots on the ground’ in the trenches with those students. They provide spiritual guidance that helps students determine how they can use their gifts in service to Christ and others,” she adds.

George has been serving in a state missionary support capacity, working in administrative duties with Stephanie Godoy. Both individuals serve in behind-the-scene roles to support the campus ministers and process students for summer missions experiences, such as the popular Send Me Now program.

Together the two process the detailed applications for the many missions opportunities which are offered to the students year-round. There are summer missions, Spring Break trips, and experiences for international students who know very little about the gospel. 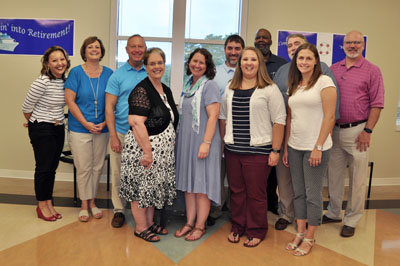 “Today the state is a true melting pot and our campus ministers are working to be sure those students have the opportunity to hear the gospel, be around other students who freely share their faith, and if they accept Christ they can be discipled so they can grow spiritually.

“It is so exciting to hear their testimonies of how they came to the Lord and the change He has made in their lives. And it is just as exciting to know they will return to their home countries as a missionary themselves, sharing Him with friends and family who we could never reach ourselves,” she says.

Joe Graham served with George throughout her entire “second career” at the Board and in Collegiate Ministries and is already mourning the loss of her from his team.

A servant spirit matched with a huge missions heart

“Judy has one of the greatest servant-spirits matched with a huge missions-heart. She has been a perfect match for our department and for Georgia Baptists. We will miss her amazing work ethic and her ability to keep Campus Ministers ‘in line’ with projects and reports.  She is a jewel,” he said.

With retirement now staring her in the face, George does not plan on retiring from missions. While her last day is officially on July 31, her final day in the office will be this Thursday, July 27 … her birthday. 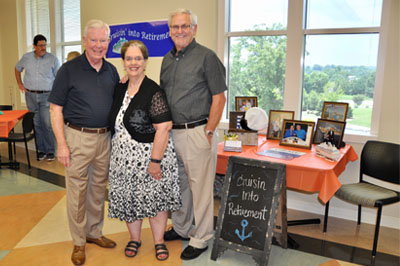 Georgia Baptist Mission Board State Executive Director J. Robert White, left, and Judy George and husband Greg stand next to her table of memories. The couple will begin her retirement with a cruise to the Caribbean in August, one of their favorite pastimes. JOE WESTBURY/Index

“I plan to be just as involved in missions as I ever have been. I currently serve as hall captain for the preschoolers at Mountain Park First Baptist and Greg teaches an adult Sunday School class.

“I want to expand my missions involvement since I won’t be going to the office. One thing I’d like to do is become more involved in working with the Mission:Dignity program from GuideStone Financial Resources. It’s a great way to provide financial and other support for retired ministers and their wives who are living on restricted income."

She is already not letting grass grow under her feet. In June she accepted the WMU director position with Gwinnett Metro Baptist Association and would like to leverage that, as well as her membership with Women on Mission at her church, to mobilize support for Mission:Dignity.

“I think we can do a much better job of building visibility for this ministry in our churches, especially through the WMU. It would be a great WMU project … you know that WMU women just love to love on people, especially senior adults.

“I also want to explore working with senior adults at our church with Dennis Rogers, senior adult pastor at Mountain Park First Baptist Church, especially since I am one myself now,” she says with a laugh.