Franklin Graham: “My hope is in God alone” 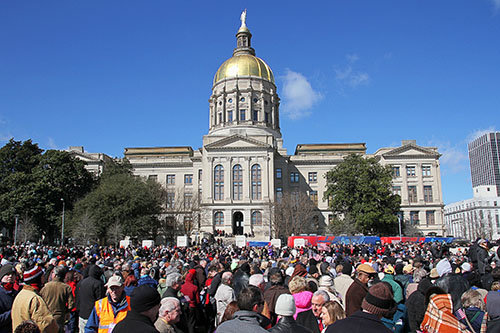 A crowd estimated by one news source to reach 6,800 gathered in front of the state capitol in Atlanta Wednesday, Feb. 10 to hear Franklin Graham speak on his Decision America tour. BRYAN NOWAK/Special

ATLANTA — Franklin Graham’s national tour of state capitals brought him to Atlanta on Wednesday, Feb. 10. Atlanta was the sixth state Graham has visited thus far and he will not complete his mission until Oct. 13, when he concludes his 50 state “Decision America Tour” in his home state capital of Raleigh, NC.

Prior to addressing thousands of people in Liberty Plaza across from the Georgia State Capitol, Graham spoke to a smaller, by-invitation-only group at the Commerce Club in downtown Atlanta. He said, “Fifteen years ago my dad (Evangelist Billy Graham) recommended to the Billy Graham Evangelistic Association Board of Directors that I be given the reigns of leadership.

“However, in my mind my dad, even though he is 97 years old, is still the boss. My purpose is to do whatever I can to assist him and help him finish well. His mind is still alert and I know that he is praying for what is happening here in Atlanta today. 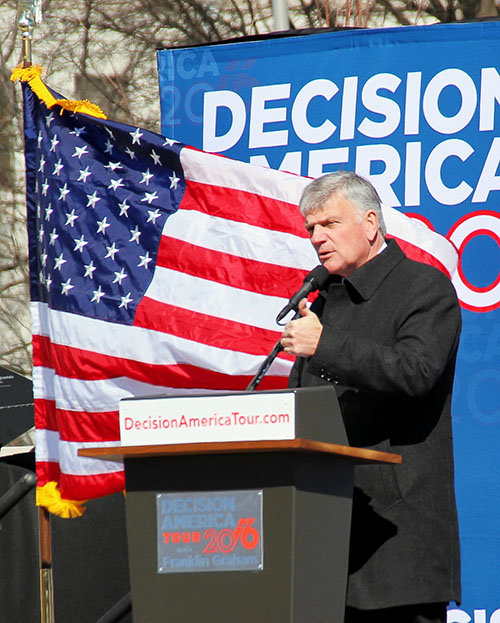 Franklin Graham encouraged Christians to be involved in the political process and become agents of change in today's culture. BRYAN NOWAK/Special

“I am concerned about the spiritual and moral condition of America. My grandchildren are not going to inherit the same county I inherited and they are not going to have the same opportunities I had. I am getting tired of what has happened in our country; and one of the reasons I am doing what I am doing this year is because the church has not voted. Jerry Falwell started the Moral Majority to elect Republicans.

“I just want to get the church to vote. In the last general presidential election 20 to 30 million evangelical Christians stayed home and did not vote.

“So this year I am going to all 50 states to preach the Gospel and emphasize the importance of Christians voting. Because of this 50 state tour we will only have one evangelist crusade this year – in Rangoon, Burma.

“When we gather at the Capitol this morning we are going to pray; and I am going to give a Gospel invitation. There is power in the Gospel. Romans 1:16 says, ‘I am not ashamed of the Gospel, because it is the power of God unto salvation to all who believe.'"

Into all the world, by all means

"During my dad’s ministry three and one-half million people trusted Christ as their personal Savior," Graham continued. "There have been 11 million saved since then because of modern technology. We can go into the countries of the world through the Internet. We pay for Google words to give us great visibility on the Internet and people are getting saved every minute of every day.

“Today when I give the Gospel invitation at Liberty Plaza I will ask those who trust Christ to text 51555 and type in 'Decision'. Those who text us will be contacted immediately by someone who will give them information on what it means to be a Christian and tell them how to grow in the Lord.

“Yesterday we had thousands of people who gathered at the state Capitol in South Carolina and there were 200 who texted us indicating that they had prayed to receive Christ.”

By noon thousands of people were waiting at Liberty Plaza to welcome Franklin Graham. One news source reported that Graham spoke to an estimated 6,800 people who braved the blustery 30-degree weather.

Second, Graham asked the people to vote for people who have biblical principles and live out those principles. He said, “Your vote matters!”

He cited the 1974 election in New Hampshire between John Durkin and Louis Wyman. Wyman won on election day with a margin of 355 votes. Durkin demanded a recount and the first recount declared Durkin the winner by a margin of 10 votes. Wyman appealed the recount and the state ballot commission conducted its own partial recount and announced that Wyman won by two votes.

Graham also referenced the senatorial race in Minnesota in 2008. That contest between Al Franken and Norm Coleman was so close that it took a legal battle of eight months to resolve the issue. Franken finally took his oath of office on July 7, 2009, more than half a year after beginning his term on Jan. 3 of that year. The evangelist reiterated, “Your vote matters!”

Graham also explained that Charlotte, NC ended up with a liberal, less-than-worthy mayor, Jennifer Roberts, because 90 percent of Christians did not vote in the mayoral election.

Finally, Graham encouraged Christians to run for political offices – for national and state offices, for mayor, for city council, for judicial positions, for county commissioner and school boards.

He quoted what his father said in 1952, “I feel that we are going to have to meet our political obligations as Christians and make our voices known if America is to be preserved with the type of Christian heritage which has given us the liberties we now enjoy. For unless America turns back to God, repents of its sin, and experiences a spiritual revival, we will fail as a nation.”