Franklin Scott reflects on nearly 30 years of ministry at UGA ... and the importance of mentoring the next generation. JOE WESTBURY/Index
Posted Friday, December 7, 2018 6:04 pm
Joe Westbury

Franklin Scott reflects on nearly 30 years of ministry at UGA ... and the importance of mentoring the next generation. JOE WESTBURY/Index

ATHENS — As a young man, Franklin Scott sensed a strong calling to ministry but he clearly knew it would not be to the pastorate.

“I knew I wanted to serve the Lord and felt His leading in that direction, but back in those days being a pastor was about the only way to respond,” he says on the eve of his Dec. 31 retirement.

Looking back over the decades of student ministry, he chuckles as he remembers the frustration he felt at the apparently limited vocational options. He checked the boxes one by one as he went down the list but kept coming up with the same answer.

Pastor? Nope, no clear presence of oratory skills and definitely not a public speaker; a self-described “extreme introvert.”

Minister of music? Nada, couldn’t carry a tune in a bucket.

Associate pastor? Nyet, no desire to stay in an office and deal with budgets and staff issues.

Then a chance encounter with a stranger who helped him and his wife unpack their trailer at Southern Seminary changed all of that. The slightly older stranger became a mentor and lifelong colleague, weaving himself into the fabric of Scott’s life.

As 2018 dwindles down into a handful of days and 2019 is ushered in on Jan. 1, the soft-spoken and jovial Scott will retire after 29 years as senior campus minister of Baptist Collegiate Ministries at the University of Georgia. When you add 6 years at the University of Arkansas in Pinebluff, he has served 35 years in a vocation that barely existed when he received his call.

Scott was born in South Carolina and attributes his “godly grandmother” with laying the spiritual foundation of his life – though he was a slow student in coming to faith. Add to that good coaches beginning at 8 years of age who taught him that he was more than what he did – excel at sports to prove himself worthy – and you get the man he is today.

“I was very insecure and created a false image of myself through sports,” he says. It was those individuals who kept pouring themselves into him that led him to finding himself and God while in college.

“All I ever wanted to do was coach high school basketball” but as his spiritual side began to gain dominance, he walked away from a graduate coach assistantship to enroll at Southern Seminary. It was perhaps the hardest decision he had made at that point in his life, but one that made all the difference in his future.

Those seminary years were pivotal in his life, with countless strangers being woven into his life. Like Scott, they were young and searching, unintentionally creating a network that would lead to a lifetime of service together as campus ministers.

After college Scott worked for 5 years at Milliken Textiles Mills in the Greenville/Spartanburg area, struggling with his identify and spiritual purpose. Then he came to faith at Brush Creek Baptist Church and admitted to his wife that he felt called to ministry. But exactly what kind of ministry remained a mystery.

A group of strangers who became lifelong friends

Ron Little was that stranger who helped unload his car at the seminary village “and showed me the way to a different path” than traditional church staff ministry. Then there was Joe Graham, who was already involved in campus ministry in Louisville; they were joined by Warren Skinner, Jerry Johnson, David Roland, Frank Murphy …

With a rare exception, they all found their way to Georgia and built the state convention’s student ministry into the second-to-none network that disciples collegians, who in turn, disciple others. 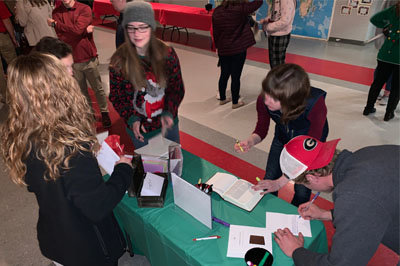 At the final chapel service students wrote personal notes to Scott on note cards as well as highlighted favorite Bible verses and signed their names in a new study Bible given to the retiring campus minister. JOE WESTBURY/Index

The importance of those early relationships cannot be underestimated in Scott’s life, and how they have lasted a lifetime.

Now, nearly 3 decades later, he is ready to pass the baton to Johnson.

Thinking outside the box

The decision to avoid the traditional route to ministry has made all the difference for Scott. Thinking outside the box is also what makes a successful campus minister and is what has empowered his ministry. Among those who shaped his non-traditional route was a Church Administration professor at seminary who discussed the rewards and struggles of pastoring.

“The professor mentioned that the average church staff member changes congregations every 18 months to 2 years. He explained that any tenure less than 7 years is not enough time to impact anyone’s life. 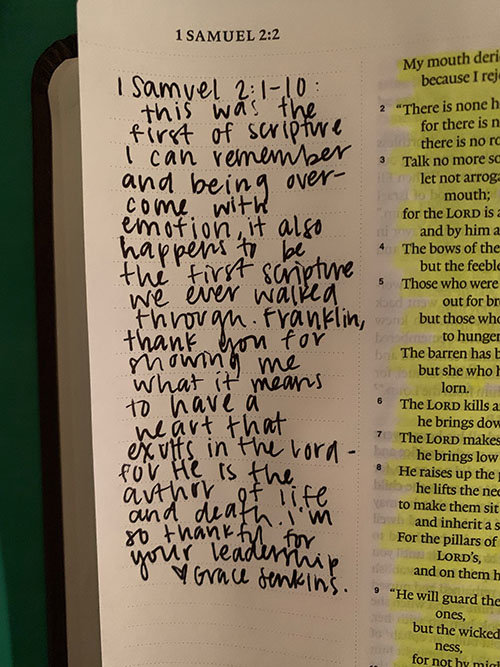 A student writes a farewell note to Franklin in a new study Bible given to him by the BCM. JOE WESTBURY/Index

“He then drove home the importance of finding a vocation that would allow you to invest yourself in the lives of others and put down roots that allow them to trust you,” he relates.

For Scott, that calling slowly took shape in campus ministry … and generations are grateful he did. For example, today he has a student, Nate Thomas, who was born to a couple who was under Scott’s mentorship years ago when they were at UGA. They, in turn, graduated and were married, and Nate's dad founded Connect Ministries in Watkinsville. Now the couple's son is being mentored by Scott.

“It’s really neat to see how that works out through the years,” he adds.

Looking back over the decades Scott cherishes his time with students and the years spent pouring himself into their lives, just like others poured themselves into his formative years.

“It’s always exciting to get a new class of freshmen every year. It can be a very intimidating time for them, being on their own for the first time and away from parent oversight, and BCM helps them with that transition. We want to undergird their faith walk or, if they are not believers, introduce them to a walk with Christ. There are 70 Christian groups on this campus and that’s good because it takes a village to reach 40,000 students,” he adds.

Scott’s goal – and that of recently added campus minister Sarah Farley – is to reach as many of those students and disciple them so they, in turn, can disciple others. Then they seek to help them discover their place of service and send them out to do what God has called them to do.

“It’s kept an old man young,” he says with a laugh.

Scott never ceases to be amazed where he finds former members of BCM around the world, from UGA as well as other campuses in Georgia and beyond its borders. He recently returned from a mission trip to Northern Africa where a missionary told him there were about 53 former BCM students from a variety of campuses serving in the region.

He then cites a list of students who are making an impact through their secular career as leaders and trailblazer in their professions. He discusses a student in New York City who is employed in a prestigious law firm. Then mentions doctors and other professionals from all walks of life. 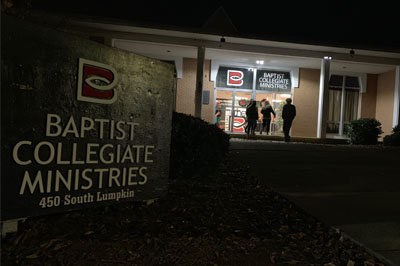 Students file into the UGA BCM building on Tuesday night for a final chapel service with Franklin Scott. JOE WESTBURY/Index

Denominational leaders include Atlanta native and former International Mission Board President David Platt, whom he mentored during his days at UGA. Platt is among those returning for a send off for Scott this Saturday evening.

“I don’t see myself as a legend, which is what some call me these days. I see myself as an Israel. There were all kinds of people who God could have used to serve Him, but he chose a rag tag group of people through which He would work.

“He used Franklin Scott, an insecure man who was not sure of who he was or of his purpose in life.”

And after 35 total years of working with future world leaders on college campuses, he finds himself assuring students that God can – and wants to – use them as well.

Scott says he and his wife, Georgia, plan to remain in their Athens home for the immediate future. He is considering returning to his early love of coaching basketball in the area. The couple have two grown daughters, Shelynn Scott and Stacey Scott.