Mike Griffin: on the firing line

Left to right, Mike Griffin and Tom Rush speak with Wes Cantrell, State Rep. from Woodstock and a member of the Georgia Baptist Mission Board Public Affairs Committee. Rush, pastor of Berean Baptist Church in Social Circle, serves as an assistant to Griffin. GERALD HARRIS/Index

ATLANTA – Mike Griffin is Georgia Baptists’ representative under the Gold Dome. There are times when he has to go toe-to-toe with members of the General Assembly in order to voice his concerns about legislative issues of interest to those he represents. There are times when he is a minority voice in an arena of politicians who have their own agenda and the backing of large corporations, well-financed lobbyists, and powerbrokers.

In I Corinthians 15:32 the Apostle Paul indicated he descended into the arena and “was fighting wild beasts in Ephesus.” When Paul was surrounded by infuriated and fanatical mobs, he remained unmoved. On more than one occasion, his emotion appears to have been ruffled by the bombastic rhetoric of those who opposed his views, the illegal violence of his enemies, and the wavering conviction of his friends; but we never read of his courage having been shaken or of his having yielded to an unmanly and unchristian timidity.

When Paul was urged by those who trembled for the safety of his life to keep at some reasonable distance from danger, his reply was similar to that of the noble-minded governor of Judea, “Should such a man as I flee?” 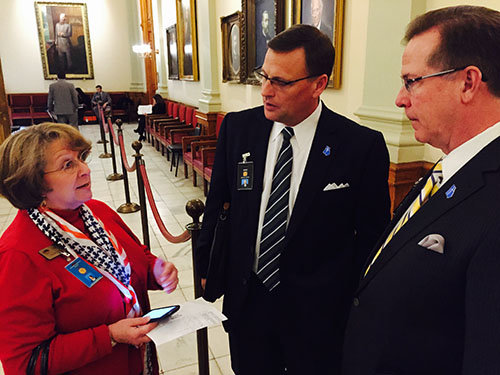 Tanya Ditty, state director for Concerned Women of America, shares her concerns with Griffin and Rush. Ditty is a member of Roswell Street Baptist Church in Marietta as well as the Georgia Baptist Mission Board Public Affairs Committee. GERALD HARRIS/Index

One of the issues that has become volatile and highly controversial at the Capitol has to do with marijuana legislation. Within the past year seven marijuana bills have surfaced in the Georgia legislature and another expected to be filed this week. The bills range from (1) a medical cannabis bill passed in 2015; (2) to House Bill 722, which would issue up to six licenses for the cultivation of marijuana in Georgia; (3) to the removal of felony charges for possession of more than one ounce of marijuana. Last November Georgia Baptists approved a resolution calling upon “all Georgia Baptists and others of like-mind and purpose to voice their protest of further legalization of illegal drugs, including marijuana.”

According to Sue Ella Deadwyler with Georgia Insight, schools have become a major battlefield where a vicious war on morality is being waged and the war is being intensified through the legislative process. Representative Keisha Waites has introduced HB 40 to force public and private schools to give sexual orientation, gender, and gender identity civil rights status in instances of bullying. Non-cooperative schools would suffer the consequences. The problem is that the definition of bullying has been expanded to include any negative comment to anyone.

Deadwyler explained, “If HB 40 were to pass, all public schools and all private schools would be forced to discard life-long policies that support traditional morality and replace them with blatant affirmation of alternate lifestyles. If that were to happen, students would lose their freedom of speech. They couldn’t say anything negative about any lifestyle.”

There are other bills that have been proposed in the past and are likely to surface in this legislative session that will also attack traditional morality.

Georgia Baptists continue to be passionate about passing a Georgia Religious Freedom Restoration Act like the ones proposed last year by Josh McKoon (Senate Bill 129) and Sam Teasley (House Bill 1023). The Senate passed the bill offered by McKoon and we express our gratitude to Lieutenant Governor Casey Cagle for shepherding the bill through the senate. We can only pray for the bill to make its way through the House and ultimately to the Governor’s desk so that it can be signed into law. 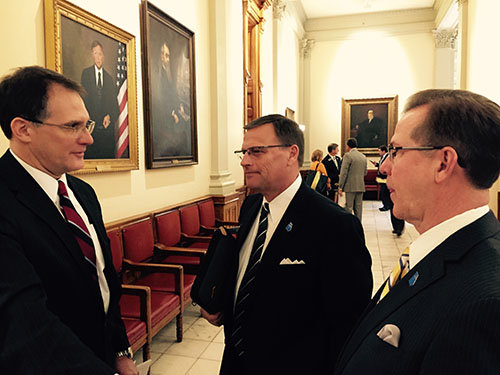 Since last year’s legislative session, House Speaker David Ralston has stated that he plans to ask that a “preacher protection” bill he is backing be given priority over other “religious liberty” bills in this year’s General Assembly session.

The Atlanta Journal Constitution announced last week that Representative Kevin Tanner of Dawsonville is the sponsor of the pastor protection bill, but that he has also introduced another bill (HB 756), which would allow business owners to cite religious beliefs in refusing goods or services for a “matrimonial ceremony." It would be extremely helpful to have the Governor, Lieutenant Governor, and Speaker of the House lend their support to a strong, uncompromising Religious Liberty bill.

Additionally, Senator Greg Kirk, a Georgia Baptist who formerly served as senior pastor of Rehoboth Baptist Church in Americus and who represents Senate District 13, has presented a First Amendment Defense Act of Georgia on the floor of the Senate. 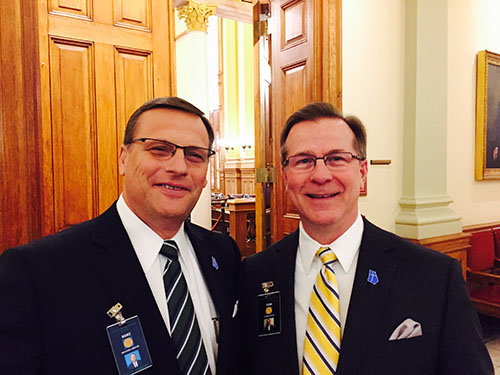 Georgia Baptist pastors are invited to come to the Georgia State Capitol on February 2 for Pastors’ Day (register here). This will be an informative and inspirational time for pastors to learn how to become a part of the legislative process through advocating for those cherished principles that Baptists have traditionally held dear. The day will include speakers who are active in political life, state senators, representatives, and religious leaders. Griffin will share how pastors and church leaders can work together to influence the issues of the day. The events of the day will begin at 10 a.m. and end at 2 p.m.

Georgia Baptists, conservative Christians, and those of like mind are urged to get involved in the fight for these important issues that will have a profound impact upon our state and citizens. You are invited to the Georgia Religious Freedom Day on February 10th. Click here to register and print a downloadable flier.