San Antonio pastor Ed Newton communicated through his testimony how students can find their worth in Christ. BRYAN NOWAK/Special

This is your time. God gave you a faith of action. Be the difference others notice.

Summed up, that was the message from the assortment of speakers and worship leaders at the MOVE Conference held Dec. 29-30 at Macon Coliseum. Previously known as the Youth Evangelism Conference, the event was hosted by Georgia Baptist Mission Board Student Groups and Faith Development. 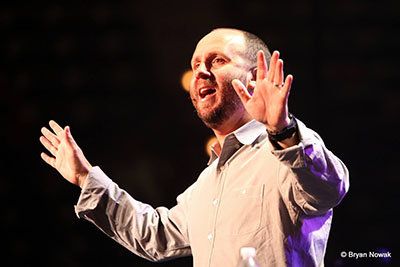 Though held at the end of 2016, the conference’s focus positioned students and student leaders to prepare for 2017.

“The focus of every MOVE Conference is encouraging students to move,” pointed out Ricky Smith, state missionary. “So many are stagnant or hesitant to step out and live their faith. We want them to allow God to move in them, so we used the word ‘move’ in a lot of different ways [to make the point].

“God wants to move them from where they are to where He wants them to be. There’s no neutrality with God. We have to be moving.”

By the time the conference ended, 334 students had prayed for a new life in Christ out of the approximately 6,500 in attendance. More indicated decisions afterwards via communication cards presented through students to their youth ministers. 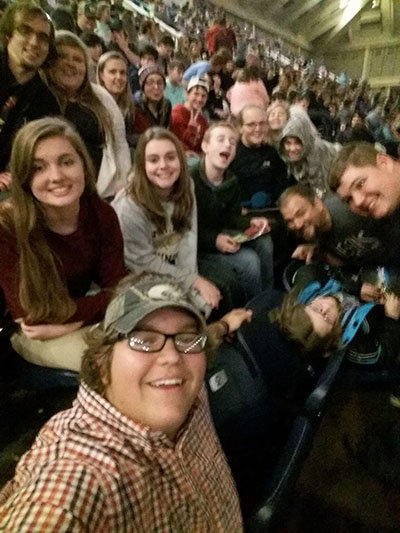 Dylan Worthy grabs a selfie with the rest of the Shady Grove Baptist Church, Carrollton youth group in the Macon Coliseum. DYLAN WORTHY/Special

As a student minister Len Kight attended MOVE several times prior to accepting a position at Shady Grove Baptist Church in Carrollton last June. Last week’s MOVE Conference was the first for his current church’s students.

“A key point for me from the conference – one I’ve repeated to my youth – was our identity in Christ,” he said. “Jesus was who He said He was. I also wanted them to understand our worth as God’s children and the value He places on each of our lives.”

It clicked with one student for sure. A middle school-aged boy, Kight reported, prayed to receive Christ after connecting with a story told by speaker Ed Newton. “It helped him see he was valuable to God,” said Kight.

The student recorded his decision through one of the communication cards mentioned earlier.

“Ed Newton and Trip Lee connected right on point,” agreed Marc Galo, minister to students at First Baptist Statesboro. The testimony of Newton, lead pastor of Community Bible Church in San Antonio, includes growing up as the only child – and voice – of two deaf parents. Accepting Christ came amid adversity and hardship during high school. 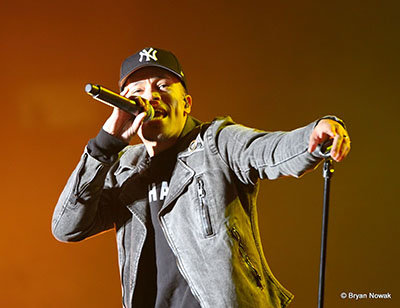 Hip-hop artist, minister, and author Trip Lee performed for and spoke to the crowd. BRYAN NOWAK/Special

As evidenced by several Dove Award nominations and three latest albums debuting at #1 on the Billboard Gospel Charts, most know Lee initially as a hip-hop artist. However, the Atlanta pastor/author/speaker has grown to become a significant voice among young evangelicals in a Church growing more multicultural.

“Ed resonated with the crowd leading up to the presentation of the Gospel invitation out of Hebrews 12,” Galo recollected, “pointing to the ‘great cloud of witnesses’ and for us to ‘lay aside every encumbrance’ to ‘run with endurance the race set before us.’ Trip spoke clearly and relevantly to this generation about authentic faith lived out, not just talked about.” 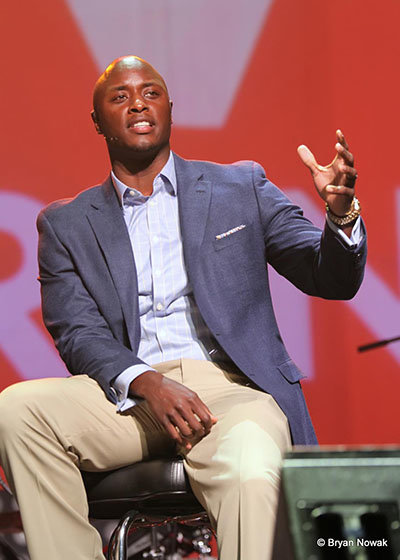 As a star at North Clayton High School in College Park, DJ Shockley went on to lead UGA to its most recent SEC championship before going to the Atlanta Falcons. Today he shares his testimony at events like MOVE. BRYAN NOWAK/Special

“In a world quick to give us labels, Paul gave those who follow Christ an eternal label,” he explained to The Index. “In Christ there is a tension of our journey. It lies where you and I understand a world with our identity based on what we do or have done. But, we have a faith where our identity is based on what someone else has done, Jesus.”

God gave students their identity in Christ, he explained. Therefore, they can’t do anything to lose it.

“I think many times we leave conferences with a list of things to do better or stop doing,” he added. “My hope is when students think about their faith they’ll live in confidence of what Christ has done. That label – in Christ – is eternal and not based on our performance.”

“Jesus didn’t save people in moderation,” Brown reflected. “That concept was earth-shattering to me. I’m one of those people who don’t get too upset our wound up about something. That can be good, but it could also mean I don’t get passionate about things like I should.”

Brown has led a group from Gordon Heights to MOVE since he joined the church midway through 2014. Sometimes he’ll see the unexpected, such as a student this year who had been experiencing doubts in his faith, but became really involved in the worship. Other aspects of the conference remain consistent, he said.

“You see so many talents used at MOVE. It shows my students that whatever your talent is, God can use it to His glory.” 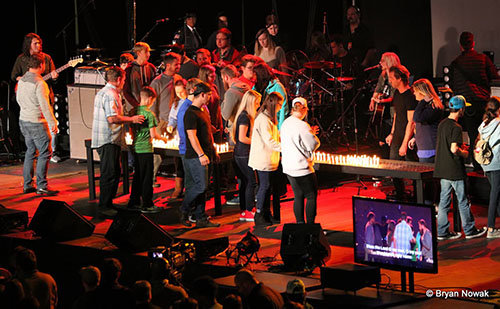 Students walk on stage as part of an alter call to proclaim their decision for Christ. BRYAN NOWAK/Special

Training for student leaders through CONCLAVE

Smith pointed to an element for student leaders embedded in MOVE. “We wanted them to consider their own spiritual walk and development. ‘Am I moving and allowing the Lord to move me?’

“We want to equip those student leaders through training and tools such as the communication cards. Those gave leaders a way to have a pulse on where their students are spiritually. It equips them to have a conversation and follow up with some accountability.” 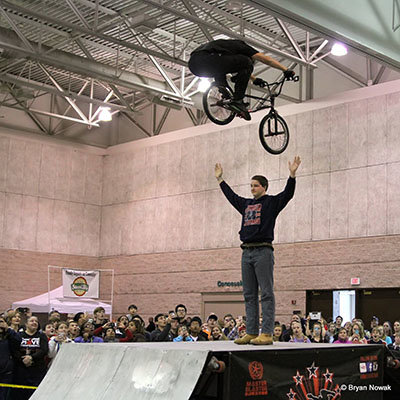 CONCLAVE presents another upcoming opportunity for student leader training. Sponsored among several state conventions, including Georgia, the conference will be held Jan. 26-28 at the Chattanooga Convention Center.

“It’s for the youth leader, in whatever capacity they serve (on staff or volunteer),” said Smith. “I’ve used it as a training tool for my leadership team. Attendees will be fed spiritually and equipped through the speakers on stage and breakout sessions.

“It’s also an amazing networking opportunity, as student leaders from numerous states attend. Our folks from Georgia will get together, too.” 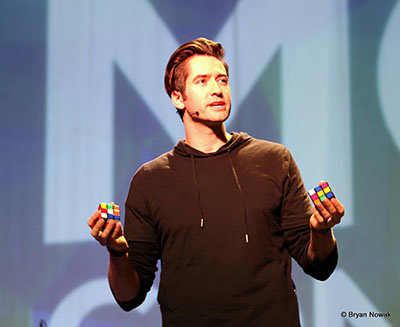 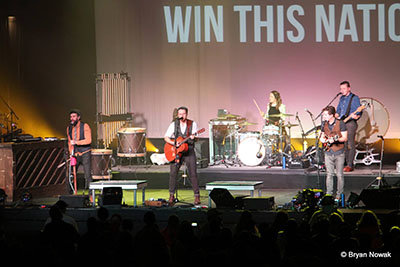 Based out of Northern Ireland, Rend Collective brought a fresh folk-rock worship style to the Macon Coliseum. BRYAN NOWAK/Special