Newington - a pacesetter in reaching the next generation

NEWINGTON — Don’t ever underestimate what God can do in a small church; and don’t ever think that students can’t be reached for Christ. Newington Baptist Church is proof positive that we should never discount the potential of an acorn – for it has the power to produce a mighty oak.

Newington is not a large church. In fact, it may be smaller than most, but it is like a pint-sized powerhouse. We would do well to notice the small things, because the rewards are inversely proportional. Remember, the pen is mightier than the sword.

Newington is setting the pace for all churches in #ReachingNextGen. They are successfully doing their part in reaching the students in their area for Jesus Christ. 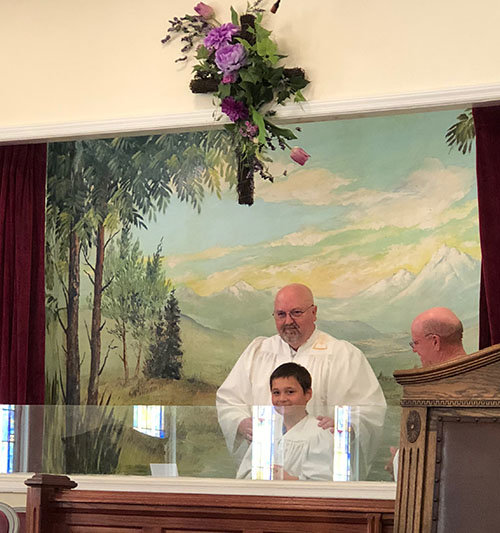 Isaac Maust was a part of the 15 students who where baptized on Easter Sunday at Newington Baptist Church. NEWINGTON BAPTIST CHURCH/Special

Newington is a small town of approximately 260 people just northeast of Statesboro. When Aaron Webb became a part of the Newington church five years ago as a supply pastor, the church was averaging 19-25 people on Sunday morning. He soon was called as the interim pastor and by September 2013 became the pastor. Now, he's the pastor with the longest tenure of 30 years. Now the church averages 50-60 on Sunday morning.

Easter Sunday was a remarkable day in the life of the Newington church, because the worshippers had the privilege of seeing 15 students baptized.

Webb lauds Johnny Gross and credits him with much of the success in reaching the students in the area. The Newington pastor stated, “The key person God raised up is Johnny Gross. He has been loving on kids for decades and I am honored to back him up in this ministry. He is not assisting me; I am assisting him in this ministry. He has been the draw, the encourager, and the motivator for these kids.

“Last year a member commented on the first principle of Experiencing God and said, “God is working in the youth area and we should join Him. The youth ministry (called Koinonia) became a true ministry of the church and not just something we did on Wednesdays.

“At a conference last spring I challenged the adults to be patient as we were having fifteen to eighteen youths on any given Sunday, mostly picked up by Johnny. I asked the adults to be involved in the lives of the youth, learn their names, pray for them, and even become engaged in their lives.

“I requested the discipline issues be brought to Johnny or myself. The church bought in and God is blessing. The Lord brought in a couple, Jeff and Julie Smith, who have given themselves to the sixth and seventh graders on Wednesdays. They are professional educators and love the students. They complement Johnny’s work with the eighth and ninth graders.

"The elementary leaders are engaged with the children and I get to teach the younger ones the Bible lesson. The team is impacting the children and training them to function well in the upper grades. Discipline is much, much better than in the past because of this." 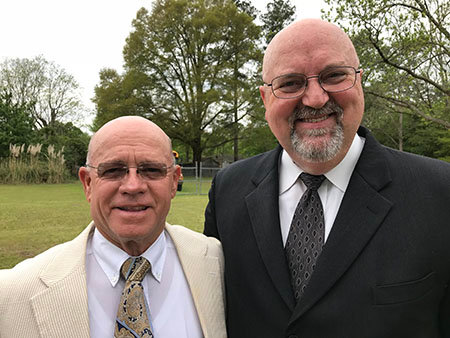 Webb continued, “We have been investing in these kids for over four years. They hear the Gospel regularly in the Bible lessons we teach. The harvest was intensified with a Disciple-Now event provided by Georgia Southern University’s Baptist Collegiate Ministry led by Dr. Jerry Johnson.

“Nic Gross, Johnny’s son, is very involved in the BCM and promoted the D-Now event to our kids. Nic will be the BCM president for next year. Fourteen students attended the event and eleven trusted Christ that weekend or in the weeks following. The students who got saved began to influence others who did not go and some of them trusted Christ as well.

“Many of those who went to the D-Now event were baptized on Easter Sunday. Even one of our BCM helpers got baptized. One of the beautiful things was the baptism of five siblings. We have had twenty students baptized in the last twelve months.”

Webb gave the Georgia Southern BCM a huge complement, stating, “This is the first year we have had BCM help since I have been the pastor. The key to that has been Nic Gross. The other collegians love him and they flock to what he is doing. Nic serves well on Wednesdays as the game director. This gets him in contact with all the students and they love him. 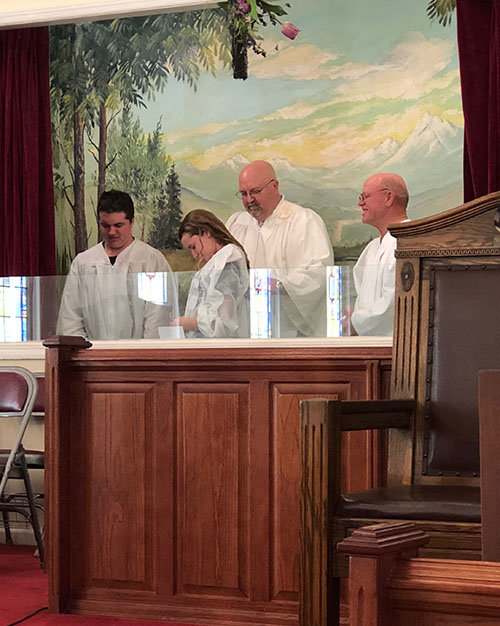 Left to right, Max and Molly Morrison were baptized by Pastor Aaron Webb and assisted by Johnny Gross, left. The pastor had a dedication for both of them before they exited the baptistry. NEWINGTON BAPTIST CHURCH/Special

"This has also led me to develop relationships with the collegians. We have a group called 'Life Wide Open' after Koinonia. Seven or eight of the University students come regularly to the Bible study, food, and games. Several of these BCM students assist us with our kids and they are a blessing.”

Webb is grateful for Johnny Gross and wanted to express appreciation to him on Easter Sunday for his service to the youth. He presented him with a Christian Standard Study Bible. He commented, “I think all the kids baptized last year and this year signed it. Some treated it like signing a school yearbook and said some precious things.

“After presenting the Bible to Johnny I presented the students as new members. They all gathered around Johnny for a large group hug.”

Webb concluded, “Easter Sunday was a glorious day, but my heart broke for over half of the candidates who did not have parents come. However, one student with a Catholic background had his parents drive down from Charlotte, NC to witness his baptism. This past Sunday a young mom of two children came to church. She was one of Johnny’s kids from several years ago.

“There is more harvesting to do and by God’s grace we will see it soon.”