John Albrycht sits in the 1974 Volkswagen Super Beetle restored by himself and a collection of others, including students from Georgia College in Milledgeville. Albrycht directs a ministry, Bugs 4 Christ, that rebuilds cars for young men and women in need. BUGS4CHRIST/Special
Posted Friday, May 6, 2016 10:59 am
Scott Barkley

John Albrycht sits in the 1974 Volkswagen Super Beetle restored by himself and a collection of others, including students from Georgia College in Milledgeville. Albrycht directs a ministry, Bugs 4 Christ, that rebuilds cars for young men and women in need. BUGS4CHRIST/Special

GRAY — For seven days, 12 hours a day Austin Blanchard, Kaleb Moody, and other students from the Baptist Collegiate Ministries of Georgia College in Milledgeville took the rough places and made them new. What began as junk, soon became something award-worthy.

The group, working under the watchful eye of John Albrycht, restored a 1974 Volkswagen Super Beetle. On April 23rd the car won Best in Class at the Watkinsville Classics in the Country Car Show and will be sold in the future to raise money for SendMeNow missions for BCM students to share the Gospel in Georgia and throughout the world.

Albrycht, a member of Northside Baptist Church in Milledgeville, has had two daughters serve through SendMeNow, so the program is close to his heart. And though this is the first time he’s led the rebuilding of a car to directly benefit missions, he’s been using the shop environment to build up young men for years, going back to his youth minister days at Plentitude Baptist Church in Jones County.

“We had quite a few junior and senior guys involved in the program,” remembers Albrycht. “A volunteer, Jeff Weeks, suggested we find a way to develop relationships with them outside of the church before they headed off to college.”

They determined the shop was the best place, a location where topics range beyond cars and spiritual applications come easier than you’d think. In the end, it’s just guys talking while they work. 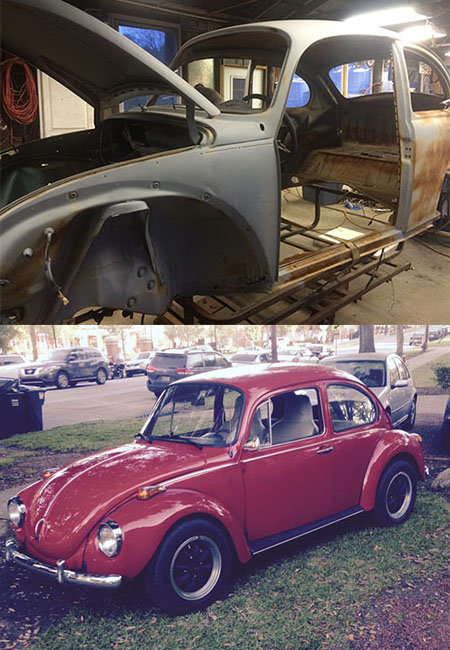 A team of Georgia College students slept in a camper beside the shop to maximize the 12-hour days spent restoring a Volkswagen Beetle. The car won Best in Class at a Watkinsville car show and will be sold, the money going to support student missions. BUGS4CHRIST/Special

A project was needed, so without asking they borrowed – okay, took, but wait for the ending – a ’71 Volkswagen Super Beetle that been shut up in a student’s barn to restore.

“It was gone for 16 months, and he never knew it until we returned it to him,” smiles Albrycht.

It’s been ten years since Albrycht and others began restoring cars for high school students, migrating toward college students, as a mentoring ministry. As word got out more wanted to be involved and today 15-18 men, ranging from 30-60 years old and stretching across denominations, take part. And although projects often take place in a group setting, growth occurs in the one-on-one conversations sure to follow.

“I like to apply Scripture and ask guys how they’re going to use truths in the Bible in everyday life,” says Albrycht. Before establishing the ministry, he’d noticed how his students were having trouble applying the Scriptural truths taught at church in their own lives. “Follow-up was missing,” he admits.

“One Friday around midnight a guy showed up at my house and said, ‘Mr. John, I need to go work on the car.’ At church, we’d been talking about sex and marriage. After 20 minutes he admitted to me he’d had sex with his girlfriend that night. Now, he wanted to know what he should do.

“I’d been involved in youth ministry for 20 years at that point and I’d never had a question with that much honesty. It’s not a question you get at church. Working on the car had created an environment where he felt safe to ask. It really opened my eyes that we’re not doing cross-generational ministry like we should.”

That openness isn’t confined to the younger crowd, either. “Older guys, especially those saved later in life, are honest about their scars,” Albrycht contends, not referring just to skinned knuckles. 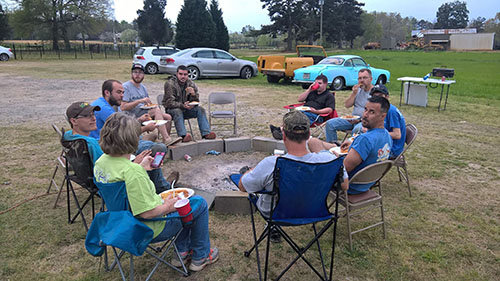 The group takes a break to enjoy a lunch of fried catfish brought by a volunteer. BUGS4CHRIST/Special

A father of five, Albrycht speaks in churches on the importance of men being the spiritual leader in the family. At last count he’s been part of restoring/rebuilding 26 cars and giving them to young men and women in need. He sees a direct spiritual association with the process.

“Restoring cars is like restoring lives through Christ,” he says. “I’ll use the repair manual of the car to show how when we live apart from the Bible we mess things up. To rebuild and repair the car we need to be familiar with the manual. We have to be ready and understand it, the same way we study and apply Scripture.”

Though Albrycht is partial to Volkswagen Beetles, as shown by his organization Bugs4Christ, various models have been rebuilt over the years. Currently he’s overseeing a restoration for Jay’s Hope, a Macon-based organization devoted to fighting childhood cancer. Funding for each project is largely attained through donations of materials, time, even food brought to workers. For the Georgia College BCM rebuild meals were provided by Haddock Baptist, Gray Baptist, and Northridge Baptist churches, among others.

Though the mentoring is – pun alert ­– geared toward the young, older generations get just as much out of it, says Albrycht.

“The enthusiasm and zest for life from these young guys is passed along to the others. The guys from Georgia College were such strong Christians they helped us live at a ‘younger level’ that week.”

And that generational highway goes both ways.

“If the goal is for kids to not just be hearers of the word, but do what it says, then we have to provide relational support. Older men have to pass on a positive spiritual heritage.”