Shauna Pilgreen and her God stories

DULUTH — Every Wednesday we have chapel at the Georgia Baptist Mission and Ministry Center. Generally, the speaker or presenter is someone on staff and the worship times are always meaningful and inspiring.

This week’s chapel was extraordinary, because we had a young woman, Shauna Pilgreen – the wife of a church planter – tell stories about how God is at work in the church where she and her husband, Ben, serve in San Francisco, CA. 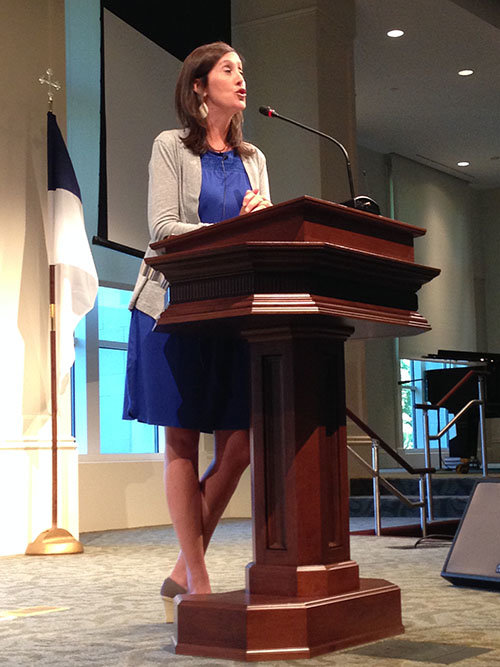 The Pilgreens and three other couples moved to San Francisco in the summer of 2010 to plant Epic Church in the heart of the city. By Feb. 13, 2011 the new church was launched with weekly services.

In just over five years the church has grown into a formidable fellowship composed of people from 44 different states and 16 countries. Shauna stated, “We have a church that is representative of the city where our church is located.” The average attendance now is 500 and on Easter of this year the church had over 900 in attendance.”

San Francisco is home to hippies, techies, and fashionistas and is known for its rolling hills, iconic landmarks, Victorian architecture, and multimillion-dollar companies. This northern California city is heralded for its diversity and multi-ethnic demographics. The city is also known for its density of population and huge percentage of people with bachelor and graduate degrees. The City by the Bay has the highest percentage of same-sex households of any major U.S. city and a population of 121,000 individuals who identify themselves as a part of the LGBT community.

The city’s political affiliation includes 57 percent Democrat and 9 percent Republican. The rest of the population is either identified as Libertarians, members of the Green Party, or declined to state their party affiliation.

A Religions Statistics Profile of San Francisco County reveals that 64.7 percent of the population classify themselves as “nones” or having no religion, 15 percent are Catholic, and only 3.8 percent are Evangelical Protestants. There are more Buddhists, more Muslims, and more Mormons than Southern Baptists in the county.

The demographics alone would indicate that San Francisco would be a difficult place to plant a church, but I am reminded of the story of the shoe company that sent a salesman to Africa to launch a campaign to sell shoes to every African living on the continent. The man came back after several weeks stating that it was an impossible assignment, because no one in Africa wore shoes.

The company brought the first man home and sent another salesman to Africa with the same assignment and after two weeks he called the company asking for more shoes. He said, “They are selling like ‘hot cakes’, because everybody here needs shoes.”

Ben and Shauna Pilgreen went to a city that one might think would be resistant to the Gospel, but they went with the mentality of the second shoe salesman and God is blessing their efforts. It is probable that no church in Georgia has grown as rapidly in the past five years as Epic Church in San Francisco.

Six years ago Ben Pilgreen was on a church staff with a good salary and plenty of security, but Shauna stated, “We started our journey by holding hands, looking at each other, and stepping off the cliff into the great unknown of this faith journey into church planting.

“As a young girl, I had already told God that I’d go anywhere. But Africa was more on the radar than an urban setting in North America.”

“We started our journey by holding hands, looking at each other, and stepping off the cliff into the great unknown of this faith journey into church planting."

But Shauna glowed with a beautiful radiance as she told one God story after another of people coming to faith in Christ and into the fellowship of Epic Church or becoming regular attenders with a desire to know more about the claims of Christ.

Shauna stated, “It was not long until I began to realize that I had more friends who were not believers than who were believers. That was a first for me, because growing up in Georgia most of my friends were Christians.”

“I am also blown away by how our children are influencers in our city, because of conversations about them or what they do. We were at our oldest’s first baseball practice and we were having a conversation with a family and things were going really well. I told the lady that we were in San Francisco to start a Christian church and she asked, ‘What kind of church?’

“We don’t hear that much in San Francisco. I grabbed both her arms, because of my excitement to meet her. Now they are thriving members of our church and it is amazing to see how God leads.”

The Shauna added, “There is a story I want to tell you about Jake. Jake is a very successful attorney and represents some very large companies, like Uber and Apple, and has taken some of his cases all the way to the Supreme Court.

“Jake and his family started coming to the church from the very beginning. They had wanted to have their baby dedicated. Jake’s wife is a believer, but he is not. So, they took us out to eat one evening and Jake said, “I want us to do this baby dedication right and I would prefer that you not mention Jesus during the dedication. 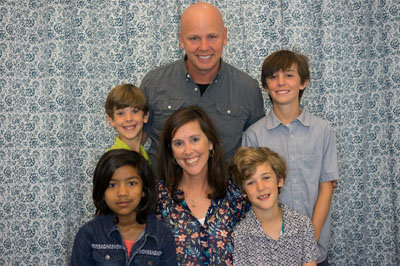 Ben and Shauna Pilgreen, along with their team, launched Epic Church in San Francisco on Feb. 13, 2011. PILGREEN FAMILY/Special

“Of course, we disappointed him, because Ben declared the name of Jesus and it was a beautiful service. After the service Jake came up to Ben and said, ‘I had no idea that these children really are a gift from God.’

“Jake continues to seek. He is in church every Sunday he is in town. He and his wife now have two boys. We have dedicated both of them. His wife is raising them and reading the Bible to them.

“We got an email from them last week telling us that the first child we dedicated is ready to place his faith in Christ. Jake and his family have taken us to some of the fine restaurants in San Francisco and he has taken Ben to two of the Golden State Warriors’ playoff games.

“Jake thinks the Apostle Paul is a superstar, but he just cannot wrap his mind around the resurrection. We have had dinners with them when he has looked at us and said, ‘If what you are saying is true, I understand I am going to a different place than you.’ Pray for Jake. He is really close.”

Shauna told other stories, but there is one more I want to share. The Pilgreens’ son, Asher, was in the hospital to have adenoid surgery. Shauna recalled, “Asher came out of surgery just fine. There was a nurse nearby who was doodling on a piece of paper waiting for him to wake up, so I decided to start a conversation with her.”

Shauna found out that the nurse just moved to San Francisco from Philadelphia to be close to her boyfriend. After a brief conversation the nurse said, “The only thing that I haven’t found is a church.”

Shauna said, “Well, there is a reason my son is asleep and I am having this conversation with you. And I told her about our church. The nurse said, ‘I have visited a few churches, but they don’t even preach the Bible.’

“About that time Asher began to wake up and he was very groggy, but he said, ‘Mom, tell her to come this Sunday. I’m getting baptized.’”

The story continues with the nurse and her boyfriend attending Epic Church the Sunday when Asher was baptized and she was the first one to come up to speak to him after the baptismal service. She is now working with children in the church and beginning this summer she will be teaching Asher in Sunday School.

I had the feeling Shauna Pilgreen could have continued for hours telling God stories about their ministry in San Francisco, and I would have been happy if she had.