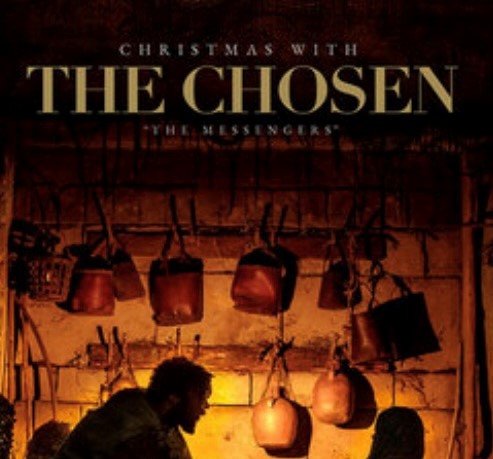 One of the promotions for The Messengers, which opens in theaters on Wednesday for a 10-day run.
Posted Wednesday, December 1, 2021 2:56 pm
By ROGER ALFORD, The Christian Index

DULUTH, Ga. – Fans of The Chosen are making their way into cinemas to watch a much-heralded Christmas project that has begun a 10-day run in theaters..

CHRISTMAS WITH THE CHOSEN: THE MESSENGERS was released Wednesday in some 1,500 theaters nationwide, including most theaters in Georgia.

Ticket sales reached $1.5 million within the first 12 hours, a record for Fathom Events, the company that’s handling the theater release of The Chosen.

THE MESSENGERS shows the birth of Christ through the eyes of Mary and Joseph and features actors from The Chosen series.

The event also features musical performances from Christian artists and groups including Phil Wickham, Maverick City Music, For King and Country, Brandon Lake and many more.

“When we decided to do a special Christmas episode, we knew it would be the ideal moment to get this on the big screen,” said Dallas Jenkins, series creator, writer and director. “It’s the first chance Chosen fans have had to gather all over the country, so we intend to make it worth it. And with all the incredible musicians assembled, this is a perfect event for inviting friends.”

The Chosen is a continuing series on the life of Jesus, available free through an app of the same name. The series debuted in 2019 and has had more than 300 million views in some 190 countries.

Jenkins told Religion News Service in October that he expects the theater showing will be especially inspiring and impactful.

“We’re hoping to communicate a fresh perspective on the birth of Christ that we haven’t seen before,” he said. By doing it in theaters, we’re really hoping people have an opportunity to gather for Christmas when they haven’t been able to for a long time.”

Jenkins said God has been using The Chosen in amazing ways.

“I think the single most impactful thing for me has been what we hear every day, and that’s that The Chosen is drawing people to Christ in a way they haven’t been drawn before,” he told Religion News Service. “It’s making them love the Bible, prayer and Jesus more.”

Jenkins said most viewers are Christian, largely evangelicals, though viewing is on the rise among Catholics and latter-day saints.

The move will show the pain that Mary dealt with in childbirth and on the fear she faced as her delivery approached.

“I think there are people who are really desperate for hope, for a reminder of the fact that some of the struggles and divisions we face today were faced 2,000 years ago,” Jenkins told Religion News Service. “We have a moment in the episode where Joseph scoops up a pile of manure to make room for Mary to give birth.

“We need to remember the birth of Christ transcends everything else we’re dealing with. Jesus didn’t come and change all the struggles people were having; he immersed himself in them.”

SBC under investigation: What’s this talk of a subpoena and grand jury?

Pastor's wife: 'So many have lost so much'