McDONOUGH — What the Lord wants above all is obedience to His call.

In the first weekend of 2018, about 150 college students from the state of Georgia came together to begin the process of answering that call.

Baptist Collegiate Ministries at nearly every campus in the state supply students to the mission field through their annual SendMeNow program.

Georgia Baptist State Missionary Clarissa Morrison said, “My prayer for students is that they are in a growing relationship with Christ and that relationship is what guides them, not only with their desire to serve, but also their openness to go where God is leading.” Morrison, who serves in Collegiate Missions and is the primary organizer for SendMeNow in Georgia, made the comment regarding the weekend event titled “Wherever that may be.”

Students begin filling out applications almost as soon as they arrive on campus in the fall. Once the applications are completed and the future missionaries have been approved to serve, students are invited to Missions Discovery Weekend, or MDW, to continue the process of placing them on the mission field.

“I hope students learn a little bit about themselves throughout the process,” Morrison noted. “My hope is that this allows them to see their role in the bigger picture of spreading the Gospel.” 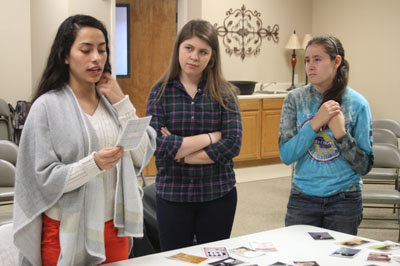 Sarai Avilla, left, models one of the many evangelistic tools that SendMeNow students will have at their disposal throughout the summer while they are in the mission field. Avilla is a student at Georgia Southern University. ADAM WYNN/Special

During this weekend, students spend time in groups with other potential servants while campus ministers and volunteers sort through the paperwork, making their own observations and recommendations along the way. Students will also interview with people leading the trips they hope to serve alongside. When the whole weekend is over, campus ministers gather together and prayerfully dole out assignments.

“This process is not an exact science,” Morrison explained about how they place students. “We depend on prayer and God’s guidance more than anything, and I am continually amazed at how God works through this process as well as through our students over the summer wherever they are appointed to serve.”

The gymnasium at Glenhaven Baptist Church on that Saturday afternoon was full of students who were new to the process and students who had been around several times before.

For these students, obeying the Lord’s call to serve is the highest priority. 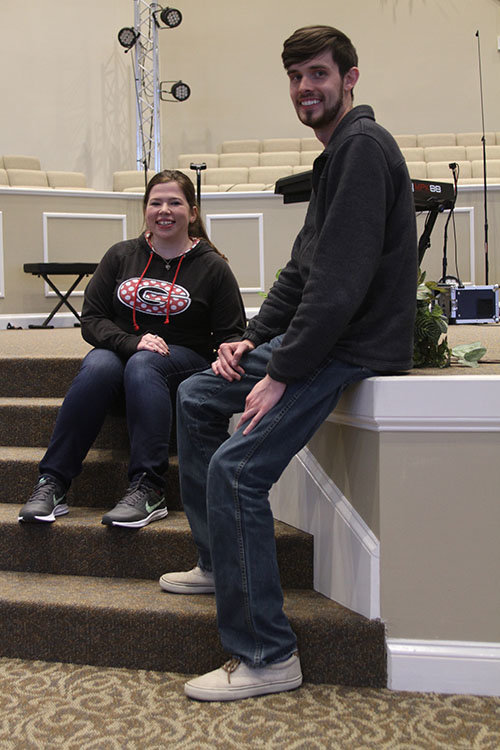 Morgan Allen, left, and Davey Arrowood, right, are both students at the University of North Georgia in Dahlonega who will serve in this summer's SendMeNow missions program. ADAM WYNN/Special

“It’s really cool because this is my first time doing SendMeNow,” Davey Arrowood, a student at the University of North Georgia in Dahlonega, said. “I finally fully realized what SendMeNow was three weeks after the deadline last year … and I wanted to do it as soon as I could.”

Arrowood, who is a member of Philadelphia Baptist in Blairsville, started college as a biology major with aspirations of pursuing dentistry. He has since changed to a political science major with hopes to attend seminary after completing his undergraduate program.

Morgan Allen, who is also a student at the University of North Georgia in Dahlonega, is a veteran of SendMeNow, having served overseas during summers past. Getting to come back and go through the process again, she knows a little better what to expect from the process, from herself and from God.

Allen was fortunate enough to receive her first choice the first year she went on SendMeNow, but a medical emergency forced a last-minute change that taught her a lot about God’s timing.

“I love this weekend, but you never know what to expect,” Allen explained. “Being there changed me and taught me things I needed to learn before going somewhere else.”

Originally from College Park, Allen is a member of First Baptist Cliftondale and will graduate with a major in kinesiology and a minor in psychology.

“I want to be pushed out of my comfort zone,” Allen, who found out that she will be serving in Africa this summer, said. “He knows where I will serve most effectively.”

Anna Bennett, a fifth-year University of Georgia senior studying furnishings and interior design, is something of a legacy in SendMeNow. She and her siblings, who all grew up at Hopewell Baptist Church in Gainesville, came through BCM and SendMeNow.

Bennett is no stranger to the process, either, having gone to Brazil during the summer of 2016 to serve on an Olympic outreach team while partnering with a local church to help with community outreach.

“I grew a lot in my walk with the Lord on that trip. It was a pivotal, life-changing point in my life. I came away a different person and really grew in Christ … but I also loved finding community in my group and helping them grow closer to Christ and experiencing the international church,” Bennett added. 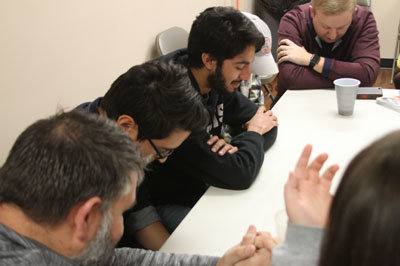 A group of students and volunteers prays together at Missions Discovery Weekend in January. ADAM WYNN/Special

With three siblings who had gone through SendMeNow, Bennett knew before even coming to UGA that she wanted to take part in this process.

Two of those siblings, Trey and Elizabeth Bennett, are fellow UGA alum.

“They all had positive experiences with SendMeNow, and they all encouraged me to make it a priority,” Bennett noted. “Seeing their experiences helped me push through and go for it.

"If I could go back and change one thing about my college career, it would be to go back and serve every year I was in college.”

Bennett, like many students, came into MDW with an open and willing heart, seeking wherever it was that God was wanting to send her.

“I’m just trying to be flexible and content,” Bennett concluded. “SendMeNow has been a life-changing thing for me…and I’m excited about having this opportunity.”

After MDW, Bennett learned she would be serving in southern Europe.

SendMeNow is a unique opportunity among college missions organizations because many expenses are taken care of by the statewide BCMs through year-round fundraising efforts.

Bennett believes that many students use the financial aspect as an excuse to not serve, so the fact that SendMeNow is paid for opens the door for students of all types to serve the Lord.

“Because SendMeNow is an organization that the BCMs all work together and fundraise together, it takes care of the financial part for you. You don’t have a good excuse to not go,” Bennett reinforced. “We’re commanded to go, and so it’s just whether or not you’re willing to say yes and take advantage of the opportunity.”

Allen, who is in her final year of SendMeNow before graduation, is more keenly aware of the time limit naturally imposed on this particular service option. 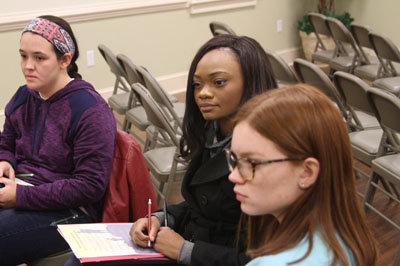 “This is a really good opportunity for college students,” Allen acknowledged, “because after this we really won’t have this time. And we fundraise, so it’s not like we have to pay out of pocket, either.”

Some students come in with a plan of where they want to go, but Allen, Arrowood, and Bennett are all aware of how God’s plan will inevitably trump their own.

“That’s what I’ve been talking about all weekend because I have my plans … but God is always three steps ahead of my plan,” Arrowood mentioned. “Wherever the Lord leads me will be the right place.”

Arrowood has been selected to serve in Texas as a disaster relief intern.

“I’m really excited because I wanted to go to Texas, but it’s even better because I’ll be doing disaster relief ... administrative work, as well,” Arrowood said after learning of his assignment.

“My prayer for the past several months has been that I stop what I’m doing and let the Lord take over my life,” he emphasized. “It sounds simple, but I’m still having a really hard time with it.”

This story is the first in a series that will follow Morgan Allen, Davey Arrowood, and Anna Bennett through the SendMeNow process, culminating in their return from mission service across the world at the end of the summer.