Open Door: A mission to the San Blas 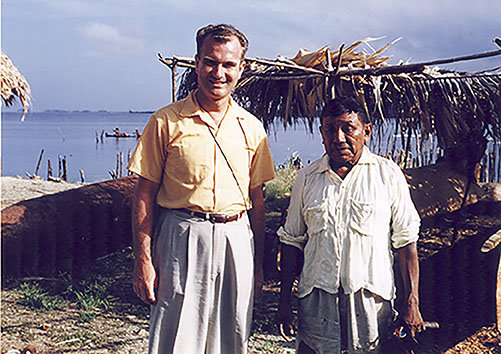 Pastor J.R. White of Main Street Baptist Church in Jacksonville, FL, stands with the San Blas tribal chief while on a mission trip to the San Blas Islands off the coast of Panama.

In the mid-1950’s, my Dad, who at the time was pastor at Main Street Baptist Church in Jacksonville, Florida, went on a mission trip to preach the Gospel among the Kuna Indians of the San Blas Islands off the coast of Panama. What happened was a true missionary experience among a people who were living in simple and primitive ways.

Dad wrote a letter while there, which I re-read recently, and thought I would share portions with you. The reason I want to share this is the need for Christ on that small island and the need for Christ among people everywhere is the same. The response to the Gospel there brought the same joy that it brings today when a person comes to Christ.

“We arrived at the airport in Panama before daylight for our flight to the San Blas Islands. The small, single-engine, beat up Stinson makes the trip before dawn because as soon as the sun comes up, the mountains on the Isthmus are covered with clouds. The pilot warmed the motor and we were soon in the air. We flew south along the Pacific coast as we climbed to an altitude of 7600 feet. We were soon above the clouds that hovered over the mountains.

“The flight to Ailigandi, the island on which I am working, took a little over an hour. When the plane broke through the clouds, there below us was a tiny, little coral reef island about the size of three city blocks and covered with thatched roof huts. Later, I found that there were 1500 Kuna Indians living on that tiny little island.

“The plane landed in a little clearing on the mainland. We were met at the plane by Lonnie Iglesias, the native San Blas missionary; Atilio Rivera, the native pastor; and a group of eager young people. After saying goodbye to the pilot, I turned to see that the Indian boys were already carrying my luggage to the cayucas, dug-out canoes, for the trip over to the island, about a half mile away.

“We were met at the dock on Ailigandi by a crowd of Indian men and women, a bunch of little boys, and by Mrs. Marvel Iglesias, an American white woman, a wonderful Baptist missionary, who has spent the past twenty years of her life on this island winning people to Christ.

“In the evening of that first day, I went with the missionary to meet the island chiefs in the Congress Hall, which is a large thatched roof building in the center of the village. The chiefs and their braves, twenty-four in number, were seated in a circle in the center of the building around some hammocks where the chiefs recline and chant their messages to the people. We talked together for more than an hour. I was finally extended a cordial welcome to Ailigandi and assured that the chiefs would cooperate with us during the meetings.

“When we met for the preaching service, it seemed that the entire population of the island showed up. Every seat was filled and men, women, and children crowded around the door and sat on the floor. I preached on the theme, 'The Pre-eminent Christ,' offered the invitation to come to Christ, and many came forward to speak with us about becoming Christians.

“There have been many decisions for Christ. One girl in her prayer after the service last night said, ‘Tonight, for the first time, I realized that Jesus Christ died for me.’ What I have witnessed here in the San Blas has brought to my heart, with renewed conviction, the truth that Jesus is, indeed, the Savior of the whole world.

“One of the boys said before the revival, ‘That American isn’t going to say anything to touch my heart,’ but he was one of the boys who was converted last night. After his decision to trust Christ, he said, ‘I have the strangest feeling of peace and happiness in my heart since I trusted Jesus, now I know what it feels like to be a Christian.’

“It is thrilling to see these primitive people have the same kind of experience, with the same responses which the people in our own land have when they trust the same Lord and Savior.”

That letter was penned 60 years ago, but the message of the letter is amazingly relevant for today. Think of Marvel Iglesias, who buried herself in the San Blas culture, cut off from civilization, faithfully winning the Kuna Indians to Christ for 20 years.

Georgia needs Jesus, just as the Kuna Indians needed Jesus 60 years ago. When Georgians trust Christ, they will meet the One who died specifically for them and they too will have “the strangest feeling of peace and happiness” in their hearts as did that Kuna Indian boy.

Georgia Baptists, let’s make 2016 a glorious year to remember as we do more than ever before to reach Georgia with the Gospel of Christ.