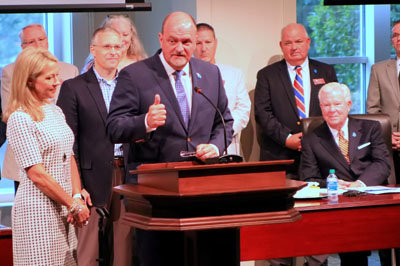 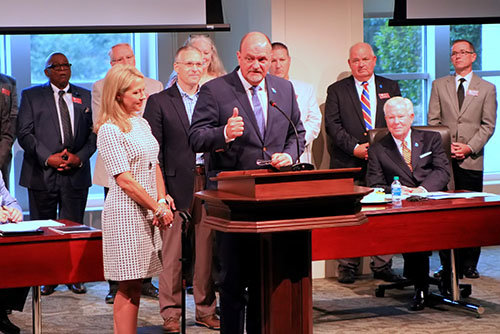 I want you to know that I was elated about the decision. Thomas is absolutely the best choice. I do not know anyone who has had the varied experience in Southern Baptist life that Thomas has had. He has served capably in every capacity as pastor, associational missionary, on state staff with the Ohio Baptist Convention, and on staff at both the North American Mission Board and the SBC Executive Committee. Relationally, he is easy to know, laughs a lot, never meets a stranger, loves Baptists, communicates confidently in crisis, and loves his family.

Speaking of his family, his wife Kerri is a treasure. She is a deeply-devoted follower of Christ and engaged with her husband in supporting his ministry. It is a good thing that her husband has served many years in denominational ministry. She will not be surprised by his hectic schedule, the days and nights on the road away from home.

I have observed Kerri as she relates to people in their church at First Baptist Alpharetta as I have been present on Sunday morning and at a banquet setting. Kerri’s personality is one of warmth and friendliness with everyone. The congregation at their church loves her and you will as well. She has been a blessing to the church’s Women’s Ministry and to their Foster Care program among other areas of engagement.

Thomas and Kerri have two lovely daughters, one is a college student and quite an amazing golfer and the other has a career in physical therapy. I have had occasion to be with both of these wonderful young women. They are lovely, poised and gracious.

When Thomas served for two years as President of the Georgia Baptist Convention, he led in two very fine initiatives that I will mention. He did numerous outstanding things, including the planning of incredibly inspiring annual convention meetings. One initiative was The Big Invite, an effort for Georgia Baptists to invite one million people to worship in our churches on Easter Sunday morning. We were never able to know how many were actually invited, but the anecdotal reports were quite interesting. One congregation reported actually having more visitors present on Easter than they had members present. 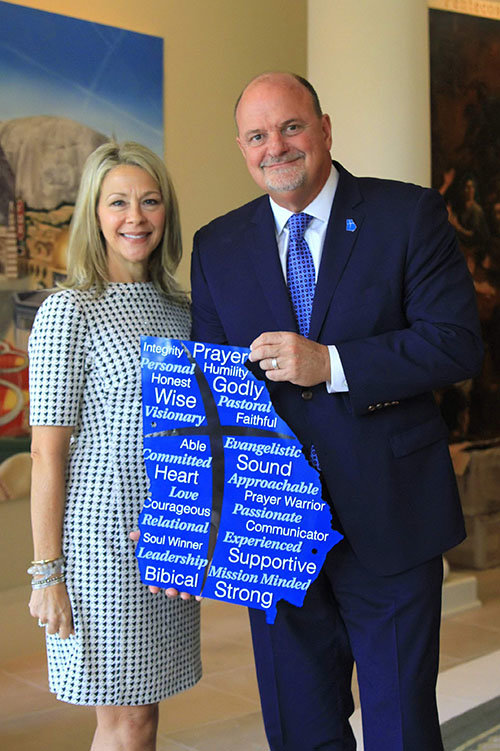 Georgia Baptists responding to questionnaires on the search for their next executive director used many words to describe their candidate of choice. Thomas and Kerri Hammond hold a representation of the Georgia Baptist Mission Board logo adorned with those characteristics receiving high mention. In addition, the logo was signed by Executive Committee members in remembrance of the day's occasion. BRYAN NOWAK/Special

What we learned through it all was the reality that people are still very responsive to personal invitations to attend church. The problem, as Johnny Hunt put it in one of our conferences, “We have lost the gift of inviting.” Thomas awakened that gift among Georgia Baptists and the response was both amazing and exciting.

The second initiative I would mention is the Pastors’ Prayer Network. Thomas conducted prayer events all across the state, meeting in the churches of our convention vice presidents.

Approximately one hundred pastors showed up at each of these events. They were ministered to and prayed for. This provided a tremendous source of encouragement to our pastors. Further, those who chose to be a part of an ongoing network signed up to be a prayer partner with other pastors. This prayer network continues today.

How do I feel about my successor? I feel great! Thomas Hammond is going to do a wonderful job, because he already has everywhere he has ever been.

Another reason I feel good about Thomas is, like me, he’s a preacher’s kid. He got a great start from his Dad who was one of our fine Georgia Baptist pastors.

Finally, Thomas is my friend. I will be his biggest cheerleader. I will pray for his ministry. I will speak positive words of encouragement to him and about him. I can’t wait to see how God is going to use him to bless Georgia Baptists!