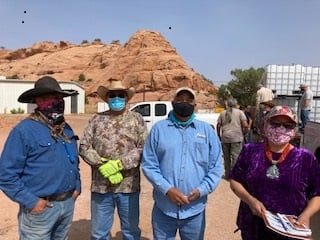 Through an initiative of the Fellowship of Native American Christians, in the last six months, volunteers have been able to distribute 150 containers each able to hold 275 gallons of water to Navajo and Hopi tribes in the Arizona desert. Photo from Facebook

OKMULGEE, Okla. (BP) – Answering an acute need, the Fellowship of Native American Christians (FoNAC) helped provide clean water to Native American tribes in Arizona this past year as a way to minister both physically and spiritually.

FoNAC, the Southern Baptist Convention’s Native American fellowship group, helped raise thousands of dollars in order to purchase 150 containers, each holding 275 gallons of water, for the Navajo and Hopi tribes in the deserts of Arizona.

Jordan Kanuho, president of FoNAC and pastor of Belvin Baptist Church in Okmulgee, Okla., said the fundraising of nearly $10,000, which enabled the distribution of water, was “a total God thing,” and the amount donated far exceeded their expectations.

Kanuho said the Abilene-Callahan Baptist Association in Texas contacted FoNAC, asking what could be done. FoNAC decided to make a sizeable donation for the purchase of several water containers.

“Once we heard and saw that need, our hearts were stirred during this situation,” Kuhano said.

Kanuho said FoNAC began receiving further donations toward the clean water project from different churches, pastors and state Baptist conventions. The full amount enabled the purchase of the water containers, which were distributed among the tribes over the past year, with 100 distributed in September 2020 and 50 in February of this year.

Kanuho said FoNAC’s main role was to assist with the fundraising efforts, but also to help connect those in the Navajo and Hopi tribes in Arizona with local Southern Baptist pastors and churches that can minister to them.

“They were able to minister to people in the tribes and just pray with some of them so it became a really big thing,” Kanuho said. “God just really opened the door to meet that need, and FoNAC was really thankful just to play our part in meeting that need.”

The water was distributed by local pastors to what Kanuho called “chapter houses” – communal meeting places on Native American reservations. The local pastors would provide the containers of water; some also provided copies of the New Testament in the Navajo language.

Kanuho said Native American tribes are often “religious” but not Christian. He said the project’s spiritual component is what’s most important.

“There were a lot of needs that come about, and it presented a lot of opportunities to minister to individuals,” Kunaho said. “We minister to them in that we can meet a need physically, but we can also share the Gospel of Jesus Christ with them because there is a spiritual need that they also have.”

Although FoNAC has been able to meet several times virtually in the past year, Kanuho said they are looking forward to seeing everyone at their annual meeting.

The Fellowship will continue the tradition of holding its annual meeting in conjunction with the SBC annual meeting in Nashville on Monday, June 14. It will be its first meeting since the 2019 Annual Meeting in Birmingham, Ala. The theme of the FoNAC annual meeting is Reviving all Nations to His Kingdom based on Revelation 7:9.

Kanuho said ways other Southern Baptists can support them is to pray for them, consider helping them financially and simply being aware of them and their ministry within the SBC.

“We would want other Southern Baptists to just know that Native Americans are still here, and we still exist,” Kanuho said. “One of the things we do as FoNAC is raise awareness of the spiritual need of Native Americans and minster to them.”