The Open Door: Seeing the need first-hand for global evangelism 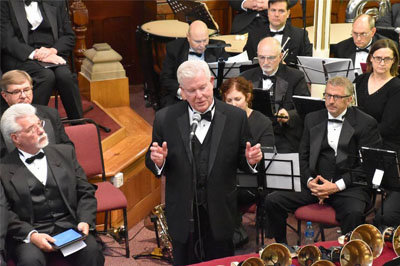 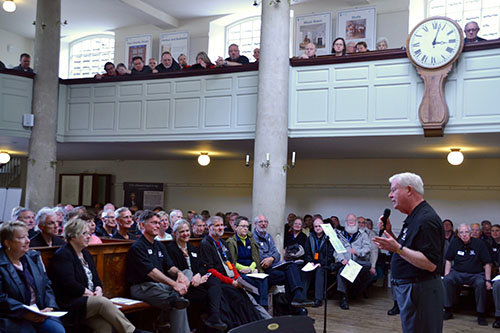 J. Robert White speaks to the Sons of Jubal and trip participants in the chapel of New Room in Bristol. EDDY OLIVER/Worship and Music Ministry

I recently returned from a concert tour of England and Wales with the Sons of Jubal, our Georgia Baptist singing men. The group is comprised primarily of ministers of music, but also includes pastors, other church staff folks, retired ministers, and one state executive director. I have thoroughly enjoyed being with this deeply committed group of Georgia Baptist leaders.

Serving alongside Dr. Jon Duncan and his capable and energetic staff continues to be a great joy. There were 230 on the tour. Along with the choir and orchestra, we were accompanied by a number of spouses and friends of the Jubals’. The focus of this mission was to ignite revival in the United Kingdom. The degree to which that occurs is up to the working of the Holy Spirit and the openness of those who were affected by our ministry.

My impression was that there are many in the UK who have not heard a Southern Baptist southern preacher proclaim the unfettered Gospel of Jesus Christ. Some said to me, “We don’t hear preaching like that around here. We need it.” At the same time, I was never far from seeing the reality of a nation that needs a mighty move of God, as we do in our own nation. 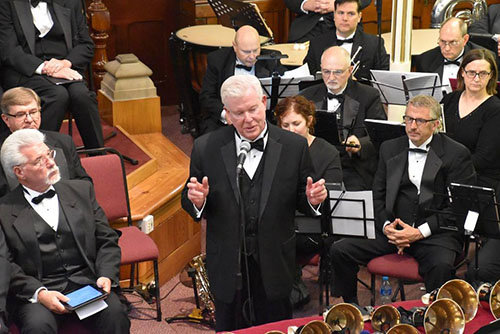 Georgia Baptist Executive Director J. Robert White had several opportunities to preach in churches throughout Wales and England. The groups divided up on Sundays and went to various churches in the area. LARRY MIZE/Special

One evening we sang our concert in a school building. There were approximately 500 people present. I sensed the need to preach from John 14:1-6, and to simply ask the question, “Do you know where you will go when you die?” I cited Jesus’ words when He said, “You believe in God, believe also in me.” I paused and looked at the people and asked, “You do believe in God, don’t you?”

One white-haired lady sitting on the second row to my right shook her head and said, “No.” I didn’t acknowledge her response, but wanted to say, “Lady, with the white hair, you don’t have a lot of time to get this right. You need Jesus and the assurance of eternal life right now.”

Agnosticism is prevalent in the United Kingdom, but so is a demonstrative, exuberant faith on the part of many Jesus followers, including a vast number of young people. One evening we sang in London with a mass choir of 500 voices and an orchestra of 110 at Royal Albert Hall for the annual Prom Praise event. It was a powerful moment.

The venue was filled to capacity with approximately 6,000 in attendance. The vast majority of the crowd that evening was under 25 years of age. I was very much encouraged about the future when I saw the vibrant worship of so many young people.

After returning to Georgia, we received an email from a young lady who professed faith in Christ and was awaiting baptism. She asked if we could send a recording of one of our songs, “Were It Not For Grace,” one of my favorites. She said that she would soon be baptized and had been so blessed by the message of this song that she wanted it played during her baptism.

These are the words of this compelling song written by Phil McHugh with music by David Hamilton, and arranged for the Sons of Jubal by Chuck Bridwell:

Time measured out my days, life carried me along;

In my soul I yearned to follow God, but knew I’d never be so strong.

I looked hard at this world to learn how heaven could be gained, just to end where I began, where human effort is all in vain.

Were it not for grace. I can tell you where I’d be, wandering down some pointless road to nowhere, with my salvation up to me.

I know how that would go, the battles I would face; forever running, but losing the race,were it not for grace.

So here is all my praise, expressed with all my heart;

Offered to the Friend Who took my place and ran the course I couldn’t even start.

And when He saw in full just how much His love would cost,

He still went the final mile between me and heaven, so I would not be lost.

Were it not for grace, I can tell you where I’d be, wandering down some pointless

road to nowhere, with my salvation up to me.

I know how that would go, the battles I would face; forever running, but losing the race, were it not for grace.

Whatever our course for the future as Georgia Baptists, we must be certain that global evangelism remains a priority in all we do. A very effective medium for communicating the Gospel of Jesus Christ is through song. It has been so since the earliest days of the Christian church, and among Georgia Baptists, must remain at the very heart of who we are, and how we tell of His grace.