Yes, such a place exists 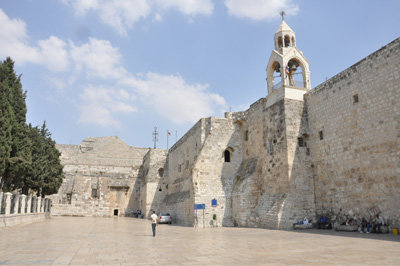 Why would thousands of people from all across the world travel thousands of miles to stand in a very long line in blistering hot temperatures and freezing weather to crowd down narrow stone steps to emerge in a stuffy small subterranean space with people crowded together shoulder to shoulder?

The church structure is indeed remarkable, but the thing that captures my heart is the crowd of people who come to that place day after day, year after year, to worship in reverence what took place in that location 2,000 years ago – the birth of the Christ Child, the Son of God, the Savior of the World.

It may be helpful to know something of the background of this remarkable location. Justin Martyr (c. 100-165 A.D.) noted in his Dialogue with Trypho that the Holy Family had taken refuge in a cave outside of town: “Joseph took up his quarters in a certain cave near the village; and while they were there Mary brought forth the Christ and placed Him in a manger, and here the Magi who came from Arabia found Him” (Chapter LXXVIII).

This writing is the first evidence of a cave in Bethlehem being venerated as Christ’s birthplace. The writing dates from approximately 160. The tradition is also attested by Origen and Eusebius in the 3rd Century.

In 326, Constantine and his mother St. Helena commissioned a church to be built over the cave. The first church was dedicated on May 31, 339. The church had an octagonal floor plan and was placed directly above the cave. Portions of that first church floor mosaic survive today.

This first church was destroyed by Justinian in 530 A.D. Justinian built a much larger church on the site. It is the church that remains today.

The Persians spared the structure during their invasion in 614 A.D. because, according to legend, they were impressed by the representation of the Magi – fellow Persians – that decorated the building.

The cave beneath the church has been honored as the site of Christ’s birth since at least the 2nd Century. This means, of course, that the site has a very strong tradition of being the place where Christ was born.

The Christmas season is deepened in meaning and enriched in experience for those who pass through the Church of the Nativity and take the narrow stone steps by the altar that go down to the cave below. My first time to walk down those steps was in March of 1972, and each time since has been remarkable.

It’s not the place that causes worship in the heart of the believer, as amazing as being there is. It’s not the elaborate decorations that declare this is where Christ was born, and this is where He was laid in the manger. It is, rather, the fact that “God so loved the world that He gave His only begotten Son, that whosoever believeth in Him should not perish, but have everlasting life.”

That’s it! That is what makes Christmas the amazing season it is. God loved us so much that He sent His only Son to die for us, to bring redemption from sin, to bring the gift of everlasting life to all who believe in Him.

It is as real as a stone cave that served as a stable in the First Century. This is Christmas!